The morning began with coffee and bagels at Rothrock Outfitters. Then a drive out to Allegrippis, where fat bikes just kept pouring into the parking lot as we suited up for the second day of Frozen Fat: Sunday Funday.

Sunday’s ride focuses much more on silliness than endurance. It’s a rolling party. Costumes are generally involved. This year was the best for costumes yet. Evan certainly won the contest with his purple dragon outfit, but Jake’s ’80s-vintage ski suit, Ellis’s hand-me-down dress (which was Jake’s costume last year), and Brent’s borrowed Darth Vader underwear were pretty great as well. I had big plans to buy something crazy at Goodwill but life got in the way at the last minute so that never happened. I have more fun laughing at everyone else’s outfits than dressing up myself anyway.

It was the biggest group ride I’d ever been on. I didn’t count, but I’d estimate there were about 40 of us. Seeing so many people on fat bikes was a beautiful thing.

Of course we stopped for log ride opportunities, as well as the traditional fun and silly contests. Who can make it down particular sections of trail the fastest, but only after running to grab your bike from a pile, or making it across a slippery bridge while The Dragon tackles you.

Laughter abounds. Snow begins to fall. It’s a great day to be outside, on a bike, in the woods.

Of course we had to ride up Sleek Dog on the way back up to the parking lot and stop and check out the new crazy log ride, for better or worse. 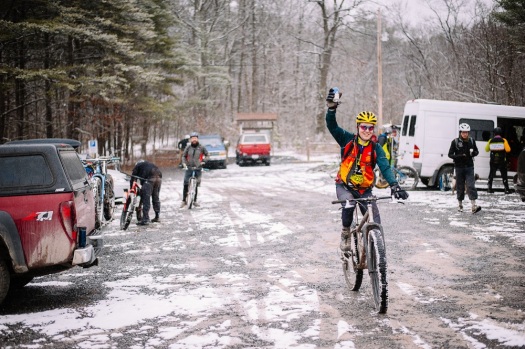 Back at the lot, we exchange beers and goodbyes. I really love the crew of people that comes out for this weekend. What a wonderful, crazy group! 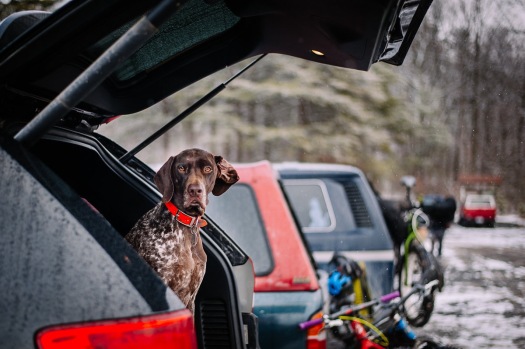 It’s been great, Frozen Fat. ‘Til next year.

All photos included in this post were taken by my good friend Sarah Anne Wharton of SAW Photography. She did an amazing job of capturing the essence of the event. More photos can be found in her gallery here (password is #frznft).