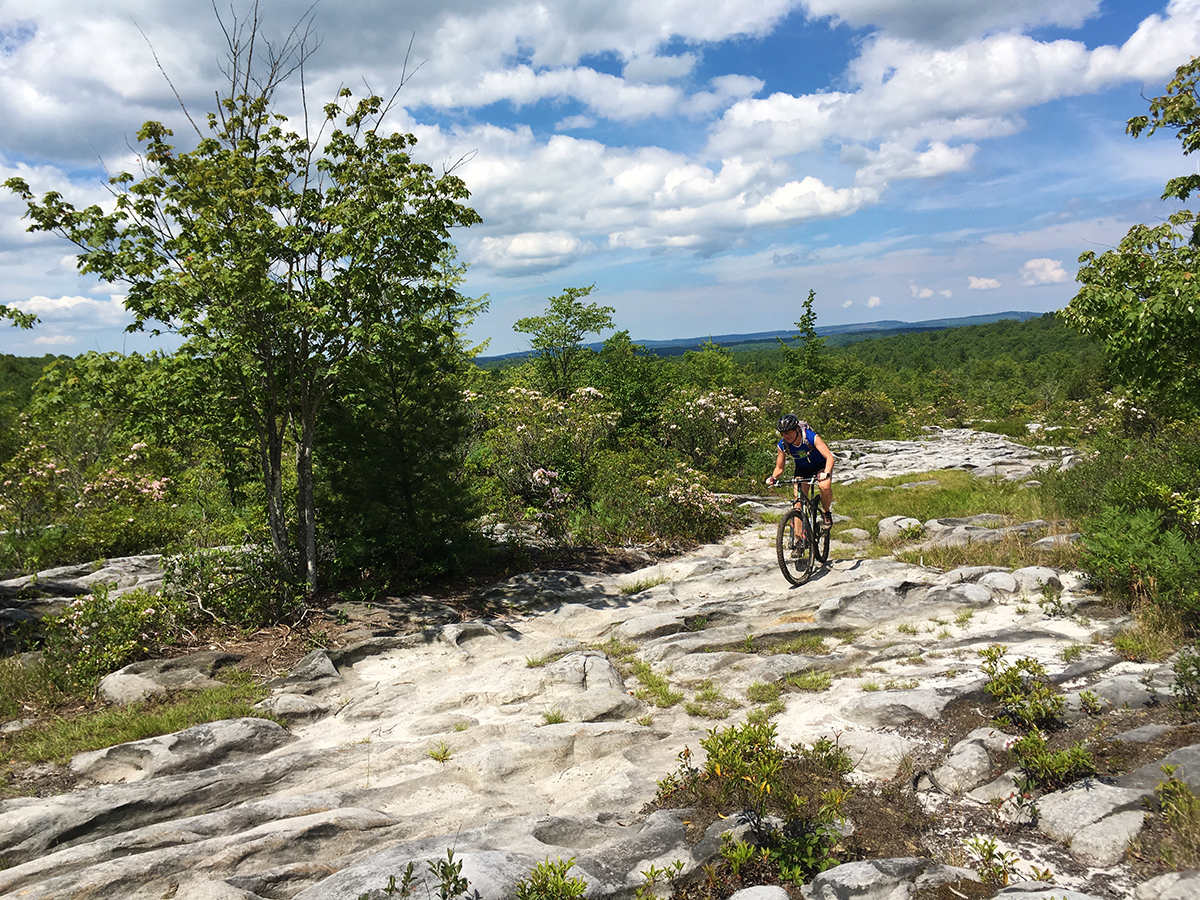 After a full day of riding at Big Bear, our plan was to hit up Coopers Rocks on Sunday. But discussions with Jeff and Annie left us intrigued about the Davis, WV area. Over post-ride beers at our cabin, we all grew increasingly curious about Moon Rocks, a giant, cratered expanse of rock atop a plateau just outside of Davis. It wasn’t long before we were convinced to make the hour-long drive the next day.

So after an evening of drinking and dancing to live music at the MoonShadow Cafe with our new friends Jeff and Annie (for some reason they wanted to keep hanging out with us!), we hit the road early but not too early. Carissa bid us adieu to head to Coopers Rock to climb and then head home (she had an interview the next day).

We parked along Camp 70 road just outside of Davis. The trail up to Moon Rocks started out in grassy fields, gradually heading uphill. It became more and more technical the farther up we got, crossing some boggy areas before becoming dominated by rock gardens. As we were navigating the mud, I was stopped by a group heading in the opposite direction who was also looking for Moon Rocks. They were convinced they were going the right way, according to the map.

I’m following the locals, I told them, and asked if they wanted to tag along. After some hemming and hawing, the group finally decided that maybe I knew what I was talking about, and turned their bikes around.

During all this, I realized that the gal standing behind the guys I was talking to looked pretty familiar.

Kelly?, I asked. I took off my sunglasses and she recognized me. She was someone I knew from the mountain bike scene back home. It’s amazing how small the world can be.

So we continued uphill, our new group in tow. Forested rock gardens suddenly gave way to the open, cratered rock face. It was quite a challenge to ride on. You had to either pick your line just right, or blast through it and keep up enough momentum to make it over the little pockets and cracks between smoother sections of rock. But it was beautiful. The scenery and view was stunning. 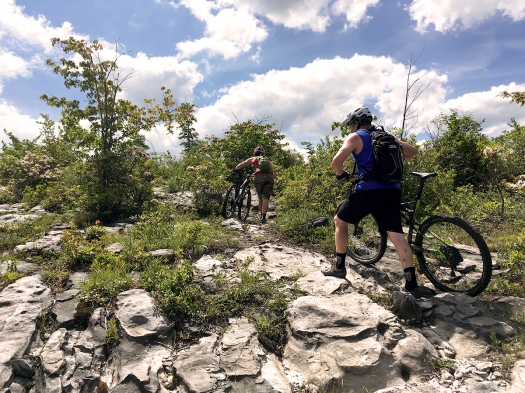 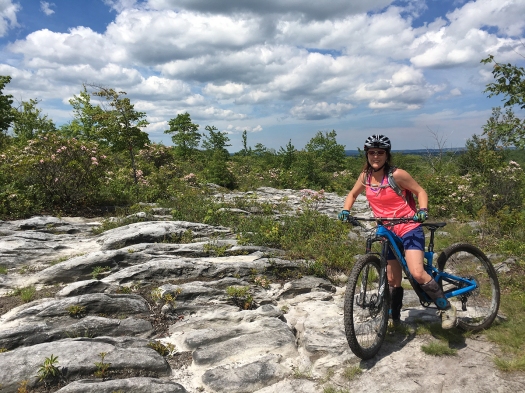 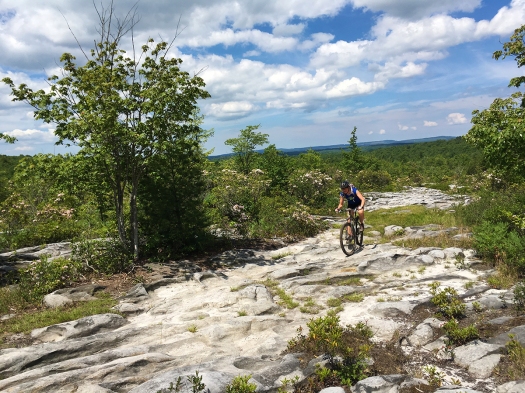 At the top, there was quite a crowd hanging out. This was the weekend of the Canaan MTB Festival, which was just wrapping up, so there were more people in town for that. And apparently this is a pretty popular ride in the area. We stopped long enough to snap some pictures, but moved along pretty quickly.

HooDoo Rocks brought more rocky goodness. I likened it to many of the trails we have locally in Rothrock State Forest, so I felt right at home. After descending back down into the grassy fields, we stopped for a snack break, and talked about potential options to finish out the day. We were only a couple miles from the car, but Jeff and Annie suggested adding on Splashdam Trail to end up with some more ride time.

Splashdam is a lesser-known gem, built rather recently and mostly only ridden by locals. It’s follows the Blackwater River, and despite the fact that we did the trail in the upstream direction, climbing was minimal. Instead, the challenge lay in the rock gardens. We took a moment to chill by the river before finishing the trail and riding out the gravel road back to the car. 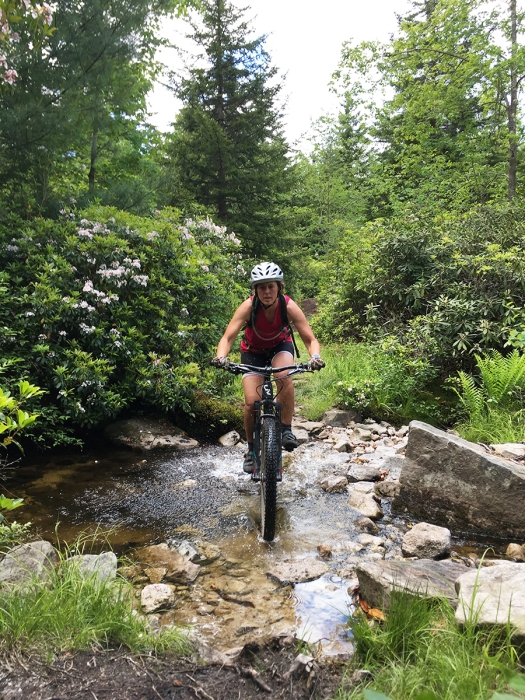 Post-ride, we gorged ourselves at Hellbender Burritos, stopped at Blackwater Falls for a quick look at the giant cascade of water, and headed back to camp.

The next morning, we did one last quick ride at Big Bear before jumping in the Jeep to drive home. Our weekend in West Virginia was amazing. Thank you to Jeff and Annie Simcoe for their excellent guiding skills, hospitality, and for putting up with us!

I can’t wait to head back in approximately a month to take part in the Big Bear Ultra Lite! 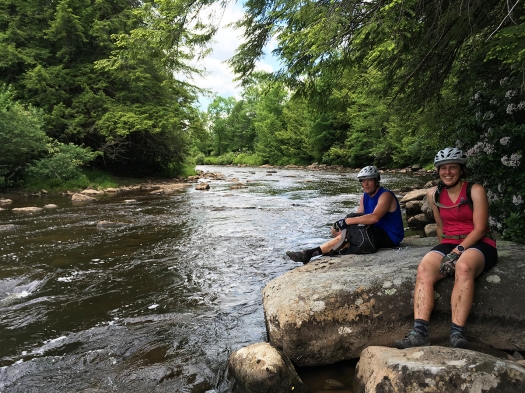 5 Replies to “Riding on the Moon.”