Caleb and I have been talking about doing a century all summer. I’d never done one on my own bike. I’ve done a 100-miler and the 200-mile ride to Thanksgiving on the tandem with Evan, but somehow I feel like that’s different. I needed to do one myself.

Caleb had never done one either. I came up with a route, one with minimal climbing to start. By minimal, I mean a little over 6000′.

We had been trying to get our schedules to align for weeks and they didn’t, until last Wednesday. We both had off. We were doing it.

I slept in town that night after working late at the bar. But I didn’t sleep well, so I woke up early, donned my Lycra outfit and rainbow unicorn fart socks, jumped on my bike, and pedaled the mile up to the coffee shop.

I grabbed a mug of steaming brown magic wake-up juice (aka coffee) and a bagel, and sat down at the counter next to a couple of the lawyers. “Riding somewhere today?” Ray asked. I told him about the century plans. He looked at me like I was crazy. “I don’t even like to drive a hundred miles,” he said. Yeah, me neither.

It was nearing 8 o’clock. I walked outside just as Caleb was coming in. He grabbed a cup of coffee and drank it as I excitedly talked about the ride. I was a little nervous. I’m not sure why.

We jumped on our bikes and pedaled away. Time to do this thing. The sun cast an orange-yellow hue over us as we climbed past the prison. It was hot already. “I’m making it a point to take it easy on the climbs,” I told Caleb. We had many miles to go.

We caught the rail trail and cruised effortlessly for a while, chatting, passing the occasional fellow cyclist and a group of Wildlife Conservation Officers that looked like they were doing some sort of training that involved running with cumbersome-looking packs. They all looked miserable.

In Williamsburg, I topped off my water bottle at the gas station. I knew The Cove would be hot, and trending uphill. The smells of farm country permeated my nostrils. The air was thick and humid. We were surrounded by fields, tractors, and silos. Off the main road, we found demo derby car central. At least 10 smashed-up cars with numbers painted on them adorned a lawn and rested on a flatbed trailer. There were a lot of short, steep climbs. That’s central Pennsylvania. Even when you’re in a valley, there’s still climbing to be had. 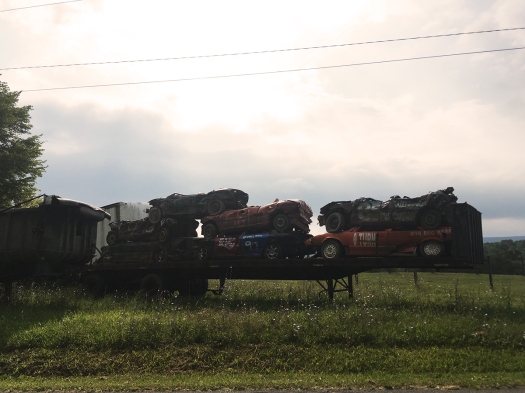 At the main intersection in Martinsburg, I pointed out Mamie’s. They have the best doughnuts. Caleb asked me repeatedly if we had to climb Cove Mountain. I reassured him that we didn’t. Instead, before we got to the formidable uphill, we made a right and continued down the valley, past more farms, little general stores, and Mennonite schools. The kids were outside. I waved, and a few waved back.

We were around mile 40, and I was feeling good. Caleb, on the other hand, wasn’t faring so well. He was beginning to have debilitating stomach cramps, and started lagging behind. I cooled off my pace. We stopped for a snack. He thought if he got some food in him, he’d feel better. We hopped on Rt. 36 to sneak around the mountain. It was a bigger highway than I’d realized, and we got buzzed by a few tractor-trailers during the brief period of time we were on the main road.

Back on less-traveled pavement, corn once again dominated the scene. We stopped at the top of a climb in a wall of green stalks reaching for the sky, and Caleb laid down in the middle of the road. A friendly woman in an SUV came across us and stopped, a frantic expression crossing her face. I quickly assured her that we were okay. “He just likes lying in the road,” I said jokingly.

Another minute, and he was up and at ’em. “If I stay there too long I’ll fall asleep,” he said.

As we cruised into Hopewell, Caleb told me he was thinking of bagging the ride. His stomach and back pains were getting to be too much to bear. He didn’t think a substantial meal would help.  We circled through town, seeing nothing but houses and a car repair garage. Caleb mentioned that he saw a little convenience store back on Rt. 26. We backtracked to it and discovered that we had no cell service, so we asked to use the landline to call for a ride.

Caleb kept reiterating that I should finish. I planned on it. I still felt good, 60 miles in.

I asked a woman in the store if there was somewhere I could fill my water bottles. She pulled a jug out of the cooler and topped them both off for me. “Where are you headed?”

I grabbed a slice of pizza and waited outside on a little picnic table with Caleb until Brent showed up. We bid our goodbyes and I got back on the bike.

Now alone, I considered changing my planned route. I was feeling great before we stopped at the convenience store, so I was thinking maybe I should add a few extra miles and more climbing. The desire to go up to Broad Top was strong. The roads would be new to me, and I’d always wanted to ride in that area.

I used the Huntingdon and Broad Top rail trail to get from Hopewell to Riddlesburg, then made a right on Six Mile Run Road, which headed up the mountain to Broad Top. I’d looked at the map on my phone as we were waiting for the sag wagon, so I knew that there were “bailout” points along the way if I changed my mind. I started up the mountain and decided to take my first left. It was really hot. My legs didn’t feel as good as they did before we stopped. Some d-bag beeped aggressively at me and I decided that I wanted to get off the main road. So I ducked onto a little back road that was barely wide enough for two cars to pass.

But I didn’t avoid the climb. The narrow strip of pavement reached for the sky, and seemed to never end.

Why did I do this? Why didn’t I just stick with my relatively easy route?

I could have turned around, but I’d made my decision. I was going to keep climbing.

I wished for a granny gear. The 34-28 on my Raleigh Willard is a bit tall sometimes, especially when I’m 65 miles in and it’s 90 degrees and there’s no break in the steepness of the grade. But I made it work, and didn’t walk my bike at all.

I spent most of my time standing and mashing, alternated with sitting briefly and turning a few really slow pedal strokes to rest my back when I could.

Somehow, I made it to the top. I had never been here before, so I wasn’t sure it was the top, but soon it became clear that I’d now be going down for a while. I hadn’t yet seen a single car on this road. I dropped into Coalmont and got back on my previously-planned route. My little detour didn’t add much mileage, but it definitely added some extra climbing.

The skies were growing dark, and thunder rumbled in the distance. I hoped the convenience store lady was right about the rain. I got my wish soon enough. I stopped to turn on my blinky, and continued into the storm. I was at mile 75 and starting to feel tired, but the precipitation helped refresh me, and my the time I got to the gradual gravel climb near Trough Creek, I was feeling good again.

I came out of the back end of the State Forest on a road of red mud and rock and noticed a sign labeling it as a private drive. I checked out the GPS on my phone, and I was still on the planned route. This was listed as a road on the map, and it connected with other roads. I guess I’d see where it went. I passed a man sharpening his chainsaw in the bed of his pickup. He nodded to me. I smiled back, hoping he’d leave me be. He didn’t seem to fazed.

I made it to Cassville and the clouds began to part. I shoved pepperoni and sour gummy worms in my mouth as I pedaled along the back roads paralleling Rt. 829. I could tell that I was beginning to suffer from a caloric deficit. The heat suppressed my appetite, but my body craved the calories. I’d have a real meal soon enough. Just about 15 more miles.

The last climb, up Corbin Road, normally isn’t so bad. It would be interesting to see how it would seem after riding 90 miles.

It felt longer than usual, but it is gradual, so I got into a groove and just kept pedaling. I was tired, but nowhere near the breaking point. Nowhere near the “I can’t go on” point. I crested the hill, breathed a sigh of relief, and settled into my drops for the descent. The home stretch.

As I descended the other side of the mountain, it got foggy and began to rain again. The last couple miles of flat pavement were glorious. I did it!