I turned 27 on Monday, celebrating another year around the sun with a long bike ride, food and beer baby, and a movie in bed before falling asleep just after dark.

I’ve always liked my birthday, but not in some sort of narcissistic look-at-me-and-how-great-I-am sort of way. I just like the time of year during which it falls. The end of May is beautiful.

It’s usually warm but not too hot yet (except last year). Most of my birthday memories take place in the sunshine. When I was a kid, it was almost time for school to be out for the year. It falls around Memorial Day, the beginning of the summer season. Generally, people are stoked to be outside.

Yesterday was no different. It was a bluebird day, temps in the 80’s, and people had off work so I had playmates.

Ryan and Allison were staying with Allison’s family in their vacation home just outside of Trough Creek. Ryan had the idea to do our classic around-the-lake ride from that spot instead of our normal Huntingdon starting point. No need to twist my arm. 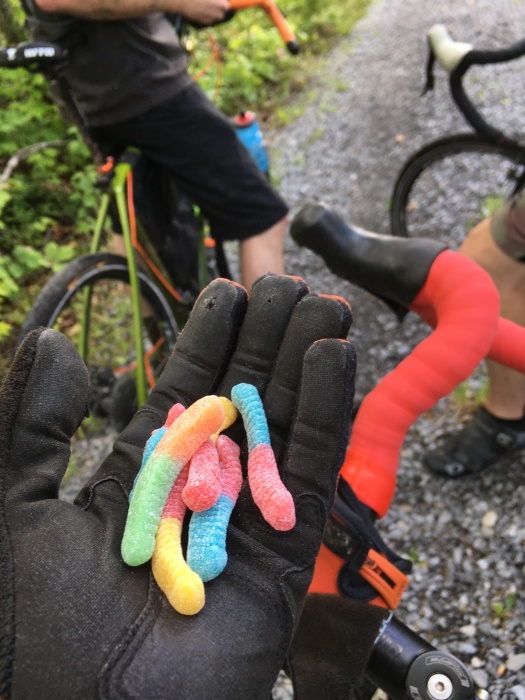 For the occasion and as a birthday present to myself, I threw my first new set of tires on the Willard in three years. I have no idea how the tires that were on that bike (Clement X’Plor MSOs) lasted that long. I didn’t start keeping track of my mileage until last June, but I’ve put over 1,600 miles on the Willard just in the past year. The Clements are good tires, I can attest to that. The rear is pretty well worn but the front still has some miles left on it. Evan threw it on his Salsa Cutthroat for the time being.

My new tires are Terrene Elwoods, a 700 x 40c dirt road adventure tread “with a fast-rolling center and aggressive side knobs,” set up tubeless. The Elwood also comes in a 650 x 47 size.

After coffee and a bowl of potatoes in the car (for some reason I really wanted some potatoes), we met up with Ryan at the cabin and away we pedaled.

The beginning of the ride took us on new-to-me roads and snowmobile trails, my favorite being the “Over There Trail.” I liked both the name and the trail itself, a lush grassy doubletrack path, littered with the occasional small log, and just-amply-enough puddle-coated to result in a refreshing splash every now and then.

I love getting dirty on my gravel bike, navigating obstacles with skinny tires and drop bars. It somehow feels a little rebellious, liberating, to get off the roads and onto chunkier trails, to blast through the mud on something that’s not a mountain bike.

There would be plenty of opportunities for that today.

Horse Knob Fire Trail, a crowd favorite from the around-the-lake route, felt extra bumpy, the rocks and logs hidden by a layer of vegetation. I’d never done this trail in the summer – it usually ends up being late fall or early spring. Rain earlier in the morning left things slick. 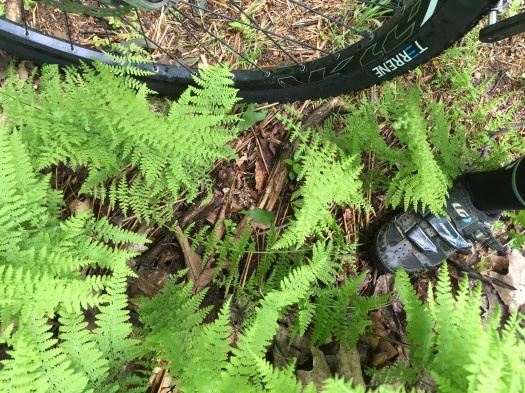 I went down in a rock garden as the result of taking the wrong line and catching the front wheel on a tombstone. My hand took the brunt of the fall, and I looked down to see blood and a flap of skin peeled away from my palm. Lesson learned: always wear gloves.

Unfortunately, the scrape was on a section of my hand that was always resting on the bars, so every bump and chatter exacerbated the pain. But all in all, it was a minor injury, and it had been a long time since I’d crashed. I was due I guess.

In Trough Creek State Park, the campground was hopping with Memorial Day recreators, and the smell of charcoal and campfires permeated the air. We jumped back on pavement for the first time since the very beginning of the ride, fighting headwinds on Rt. 994 to High Germany.

It was hot. Evan chatted my ear off up the climb. On the other side, we veered back into unpaved territory, the old railroad bed at the edge of the lake. The grass was tall, three feet maybe? More puddles. More logs down.

Past Aitch, the trail became even more overgrown, to the point where we were bushwacking parts of the way. Clumps of grass under our tires made the going rough, and we looked down to see plenty of poison ivy. I felt itchy immediately.

A jump in the lake and a good leg scrub made us all feel better and we decided to head back to the road instead of continuing to battle with the poison, briars and fallen trees.

We stopped for another swim under the bridge at Corbin Road, then started the last big climb of the day. Down the other side, and then we were on the home stretch, the last couple of miles on Rt. 829.

We logged just under 50 miles for the day, but it was a tough 50 miles. Allison’s parents cooked us a feast and we went home full-bellied and happy. I convinced Evan to stop at the grocery store (it wasn’t hard) on the way home so that I could buy myself a tiny cake and tub of ice cream, which I enjoyed before we watched a movie and fell asleep early.

It was a perfect.