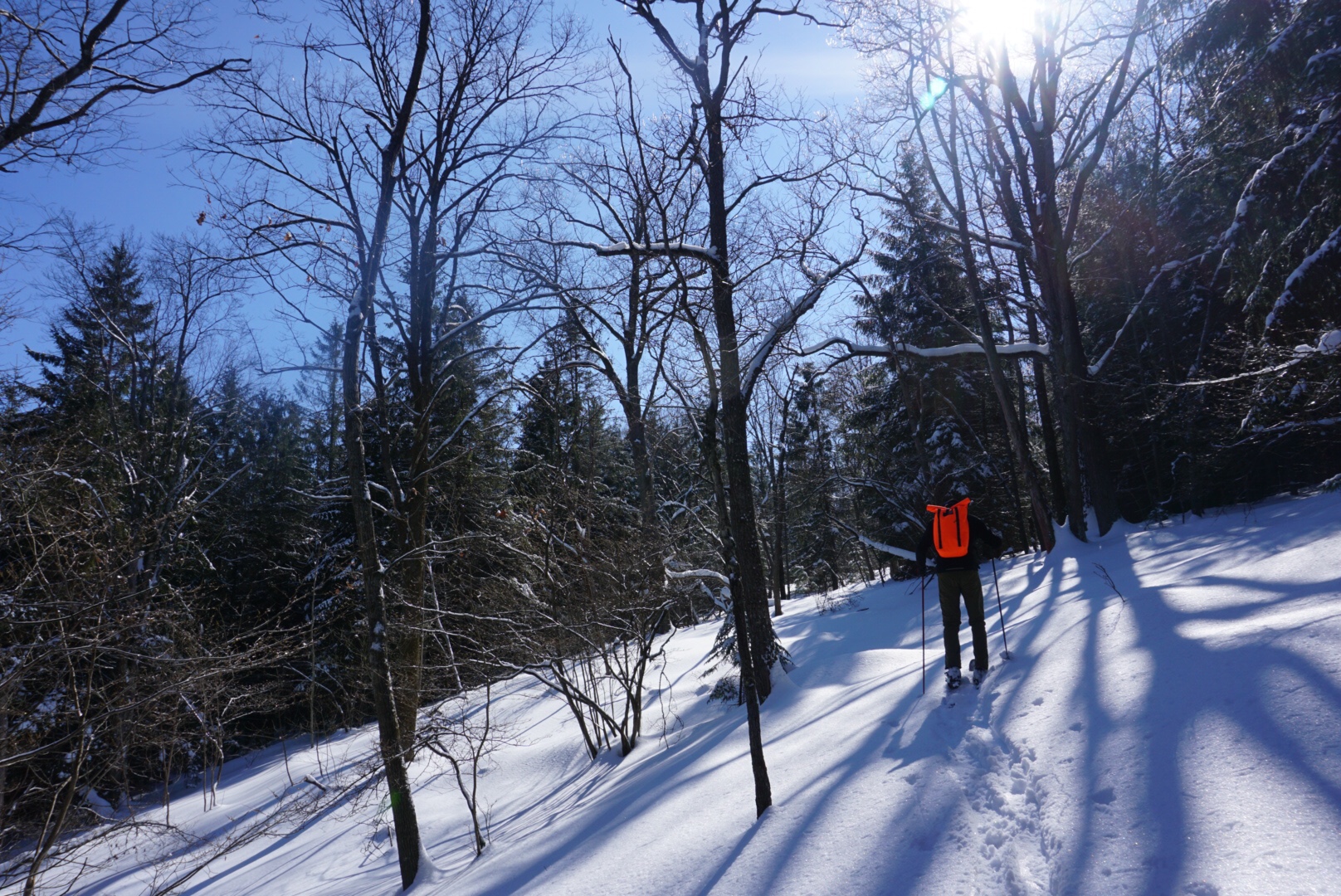 In the month of February, I spent almost twice as much time skiing as I did riding my bike. I absolutely love fat biking and I certainly enjoyed plenty of that as well, but this year I also discovered a new winter sport in backcountry skiing. A constant stream of snow and more consistent winter weather than we’ve had in years fanned the flames of my new hobby.

Though in actuality, I have come full circle back to one of my early outdoor adventure pursuits, just in a slightly different way. I was an avid downhill skier as a youth, but my interest waned in high school and the expense of lift tickets and driving to get to ski areas precluded any rekindling of that passion throughout my college years and beyond. Then I discovered fat bikes and my preference increasingly leaned towards completely human-powered pursuits. I cross-country skied a little but easily got bored with flat terrain, so it never became a go-to winter activity for me.

I like going uphill just as much as going down. I like skiing in fresh powder on ungroomed slopes. I like exploring and finding new places, not just following marked runs. I like solitude and silence. Backcountry skiing has checked all those boxes while still providing the thrill of a good descent and the opportunity to learn new skills.

Several years ago, Evan and I each purchased a set of Altai Hok skis. The Hoks feature a wider profile than traditional cross-country skis but are shorter than most traditional backcountry skis. Altai dubs them “skishoes” — part ski, part snowshoe. The Hoks come in two different lengths, 125 and 145 cm — the shorter being more on the snowshoe end of the spectrum and the longer more notably a ski. Evan and I both have the 145 cm version. Evan, at 6’3″, notes that he would like a bit of a longer ski to help him float a little more on top of deep snow, especially when there’s an icy crust as we had for a good chunk of this winter. At 5’3″, I am pretty happy with the 145 cm Hoks but also wonder what a longer ski would be like for some speedier descents. However, we do inevitably end up doing some bushwacking on our explorations, and a longer ski would be more cumbersome to maneuver through underbrush or tightly-spaced trees.

The Altai Hok skis have metal edges and rather than a removeable climbing skin like most backcountry skis, they have a synthetic fiber skin integrated into the base of the ski. This is a great feature for the rolling terrain of the Allegheny Plateau, which is where most of our skiing has taken place. A removeable skin would quickly become tedious to constantly take on and off for the endless little climbs and descents. The integrated skin does have some downsides — it makes the skis a little slower on the downhills than they otherwise would be. But depending on how you look at it, this could actually be another positive. This does result in better control and less scary descents, especially for novice skiers. We also found that the skin sometimes ended up with snow sticking to it at certain temperatures (right around freezing), but started using a ski wax that solved that problem and resulted in a faster glide as well.

The Hok skis come with several binding options. The come with a hole pattern compatible with 75 mm 3-pin bindings and a universal binding that Altai sells along with the Hok. We got the universal bindings, which allow you to use the ski with any hiking boot. The convenience and versatility of the universal binding is great, and it means you can just buy the skis and go rather than also investing in bindings and special boots. The downside is that they don’t offer as stiff a setup as 3-pin bindings and ski-specific boots. The universal binding/hiking boot combination is sufficient for cruising on flat or rolling terrain, or if you don’t plan on hitting descents aggressively. It also depends on what hiking boot you are using — obviously a stiffer/beefier boot is going to offer more support — but there is some inevitable play in the boot/binding interface with the universal bindings, especially if you have a smaller foot. I found that the toe strap didn’t go as tight as it needed to in order to get a truly solid fit on my size 38 boots.

The addition of telemark boots and bindings.

As this winter progressed and it just kept snowing, an accumulation of time on the Hoks left me wanting a more aggressive setup for greater control on downhills, especially in tight areas. My alpine ski background was creating a longing for carving turns down steeper and harder descents, but the combination of regular hiking boots with universal bindings was too flexible to easily allow for such control. So after some research, I decided to buy some telemark boots and bindings.

I lucked out and found some used boots in my size for $50 on a telemark gear buy/sell group on Facebook, but splurged on a new set of Voile 3-pin Hardwire bindings. I chose the Hardwire over the traditional cable bindings because it seemed like they would offer a bit more stiffness. Maybe I didn’t need that aggressive of a binding setup yet, but I might in the future as my skills progress, and if I was diving into this, might as well go all the way.

My new setup arrived in time for one snowy “last hurrah” weekend and then a big late February thaw, so I only have about 11 hours/24 miles on them so far. The boots took some time to break in and I definitely don’t recommend making your first ski with new boots a 6-hour excursion, but we knew it was potentially the last few days of good snow before a big thaw, so I bit the bullet and dealt with painful feet for a couple days. The boots did get increasingly more comfortable with each trip, so I am hopeful that they’ll work out and my feet will be happy in them next winter.

A little bit of temporary discomfort aside, the new gear did wonders to improve my ski control. The stiffer boots made walking on flat ground slightly more cumbersome-feeling, but the dividends paid on the descents made up for it tenfold. I could actually make the skis do what I wanted them to, while flying (okay, “flying” is an exaggeration) past trees and over snow-covered rocks and logs.

Backcountry is what you make it.

Altai defines backcountry as “wherever you choose to go, whether it’s out the back door for a quick tour in the woods, or to your nearby park, hills or mountains.” I am going to borrow that definition because I couldn’t agree more. Before this year, I wouldn’t have thought that Pennsylvania has such great backcountry skiing opportunities but that was just because I never tried.

This year has provided a deep snow base that has opened up possibilities to explore in areas normally too littered with rocks and underbrush to be skiable. A solid 24-30″ up on the Allegheny Front allows us to ski on top of fallen logs and big boulders, carving turns down slopes that would be hard to walk through during the summer months.

We wandered through the woods finding hollows and bowls, eyeing lines that are open and following them for miles on the vast swaths of public land in central PA. We found that trails actually gave us some of the worst ski conditions — they tended to be sunken in and narrow, causing the outsides of our wide skis and boots to scrape the sides of the trench. So we often used trails as a reference point, keeping them in sight but choosing to instead find our own paralleling paths through the woods.

Sometimes we found gold — areas devoid of much underbrush, gentle slopes and trees spaced far apart enough to carve wide turns. Sometimes we ended up in a mountain laurel thicket, frustrated and cold from being unable to move quickly, unsure which direction offered the most immediate respite from the entanglement. Most excursions were a mix of both — such is the Pennsylvania woods.

Because you don’t need to stick to a trail when you’re backcountry skiing, we were able to ski through stands of white birch in Marion Brooks Natural Area, to the edge of the Allegheny Front on State Game Lands 33 and through boulders in Martin Gap. We found rock outcroppings we never would have seen otherwise. We followed coyote tracks and chased herds of deer that would later follow our ski tracks as an easier means to travel through the deep snow. We carved fresh tracks in powder on hillsides that probably hadn’t seen a human in months, or more. A whole new world of possibility and winter exploration opened up.

Central Pennsylvania may not offer much in the traditional “big mountain” type of backcountry skiing that many people think of when they hear the term, but the options are endless if you’re willing to think outside the box, venture off-trail and find your own lines through Penn’s Woods.

Now I just hope we continue to get enough snow to do so.

5 Replies to “Altai Hok skis in the Pennsylvania backcountry.”