Alright, so what’s a moss ball? 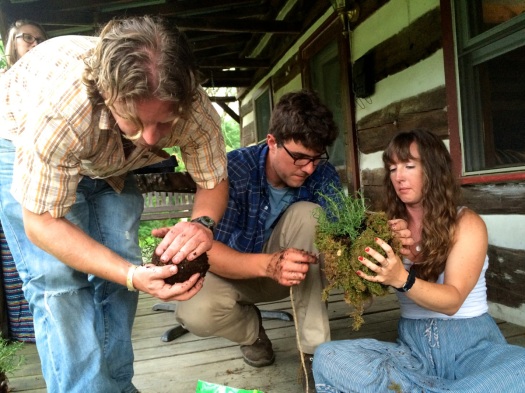 It’s a plant that is removed from its container and instead wrapped in dirt and moss. Its more proper name is kokedama, a Japanese word which translates to “moss ball.” Imagine that! The practice of gardening in this manner started in Japan, and then spread across Europe and to the United States. I first heard about it from my friend Alicia, who actually had a get-together last night to make these balls of moss. It’s a rather simple process: First, choose what plant you’d like to use. We were making specific mosquito-repelling balls, but you can plant just about anything in this manner! I chose to use a citronella plant for mine, since I’ve been wanting one anyway. 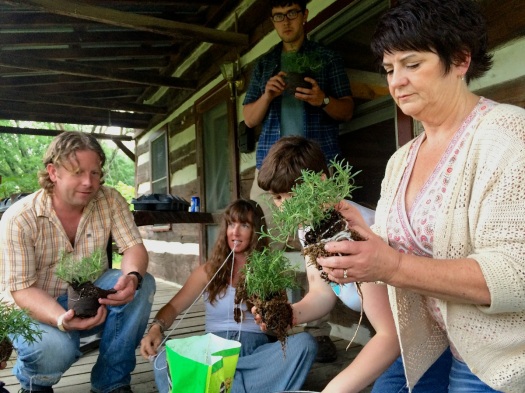 Next, grab a handful of peat moss, dunk it in the water (the same bucket as the sphagnum moss is fine), and add it to your ball. Completely cover the layer of sphagnum with a layer of peat moss. It may have a tough time sticking—try wetting it more and be patient as you pack. Once you have a layer of peat moss completely surrounding the ball, it’s time to add the final layer, sheet moss. Cover the ball once more, and finish it off with another round of twine. Remember to leave a section of twine with which to hang the ball. And, you’re done!

To keep the moss ball moist, dunk it in water for a few minutes once every week or so, depending on the climate. You can bring them inside in the winter, just make sure there is something under them for when they drip.

Here are some more articles I found on the topic:

New adventures in a familiar backyard.
Pennsylvania spring palette.
My favorite 4-legged adventure buddy and I got out for a little run/hike in between heavy rains today.
Just me & my shadow.
Digging out beds for a much expanded garden and got my first seeds in the ground yesterday (kale & lettuce). 🌱During these gloomy & uncertain #coronatimes, I’m finding that cultivating life is very soothing and the idea of growing more of our own food is extra appealing. Work from home means more time to devote to things like this and my upper body is going to be ripped from all this digging. 💪 #silverlinings
A truly #PennsylvaniaGray evening running one of my favorite close-to-home loops without another soul in sight.
Spent the weekend logging miles & Vitamin D. ☀️ Life is pretty scary and weird right now. I’m thankful for many acres of forest just outside my door to keep me healthy and sane while #socialdistancing.
All dat ☀️☀️☀️! Explored some new places today with this fine crew, getting those @theappalachianjourney legs on.
Snow squalls and high winds while exploring some of the game lands behind Toftrees yesterday, working to stay consistent with running even though they’re all short and slow these days.
I love planning routes, poring over maps of places I’ve never been or searching for new ways to link together places I have. From a map, you can get a sense of what a place is like but you never really know until you go explore for yourself, and there are always surprises. That’s what makes it fun. Most of the times, the rides turn out pretty darn good, but this Saturday’s ride was great. 🔥 Cowan’s Gap to the Abandoned Turnpike and back.
Back in the office today but still full of stoke on an incredible weekend in the desert. Stay tuned for bloggage and some articles on @singletracks to come!
Sunrise light at #24HOP. Playing double duty bike racer/journalist meant some sacrificed sleep to capture these moments but it is so worth it to get to do this.
%d bloggers like this: