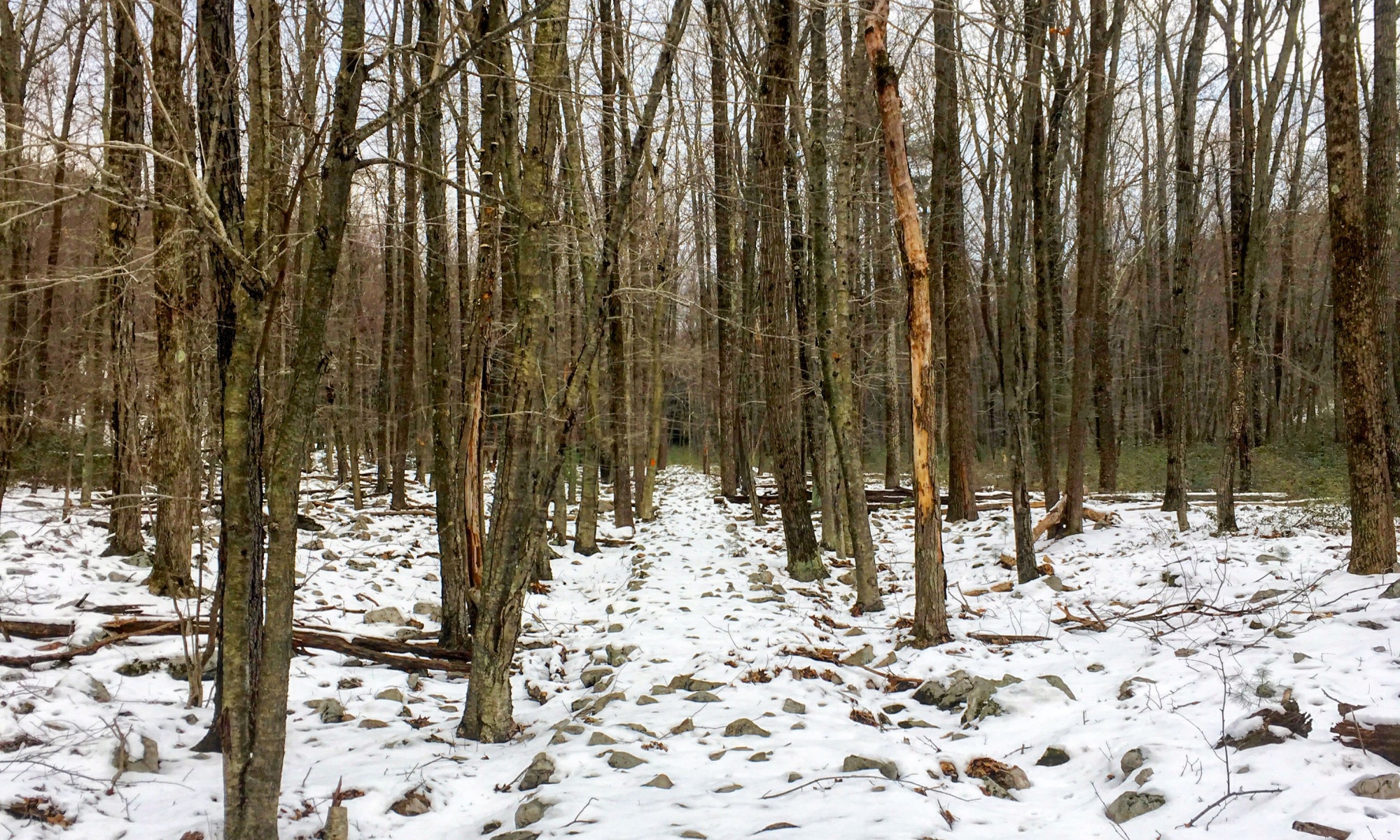 I took a break from my run and stood in the middle of the trail, looking at the unending ribbon of slush-covered rocks ahead. My feet and ankles were starting to ache from sliding and trying to catch my balance. I’d gone about 2 miles but it felt like 10. I looked at my phone for the time. It was creeping up on 4 pm and if I followed my original plan, I had 7 left miles to go. I’d started the run 45 minutes earlier, thinking 2 hours was enough time to run 9 miles before it would get dark a little after 5 pm. I didn’t bring a headlamp for that reason.

Disappointment washed over me. I’d skipped my long run last week because I felt generally fatigued, presumably because it was in the single digits most of the days. Now, it was 40 degrees and I was excited to run farther than I have in a long time.

But I hadn’t anticipated 3 inches of snow still on the trail, now turned to slush. There was barely any snow left at my house. I should have known – this section of Rothrock State Forest, in and just north of Detweiler Run Natural Area, tends to be colder than its surroundings. I figured there would be some amount of snow still left on the ground, but not this.

I also hadn’t ever done parts of this trail, the Mid-State as it runs along Detweiler Run and then heads up and over the mountain towards Penn Roosevelt. I usually run from Alan Seeger and do an out and back, turning around long before I reached the point where I was at right now. It was rockier than I expected.

The trail up here was also grown-in in a number of spots, only adding to the challenge as I tried to avoid getting whacked in the face by brush and my tights torn by thorns. About a half mile back, I’d also dunked my entire foot when I stepped on what I thought was solid, snow-covered ground and ended up being very thin ice on top of several inches of water. Luckily, I was working hard enough to keep my foot warm and it wasn’t cold enough that I was super worried about it.

Dinah stood a few feet away, staring up at me. Why aren’t we moving?

Good question. Was I just going to stand here and waste more time as I tried to come to terms with the fact that I was not going to make it to 9 miles today?

I’m not always the best at changing plans. I can be stubborn. When it comes to physical pursuits, I’ve learned to not turn around and quit at every sign of adversity or discomfort. The only way to get better, to go farther and longer and faster is to work through some amount of pain and hold myself accountable for what I set out to do. If I gave up every time it hurt I wouldn’t have ever started running or biking in the first place. In daily life, I plan scenarios in my head as a way of dealing with anxiety.

I could make a left at the next trail intersection instead of a right and turn my 9-mile run into a 6-miler. That seemed like the best course of action at this point. If I got back to the car with some gas left in the tank and daylight to spare, I could run up the gravel road for a while.

I was still a little disappointed that I wouldn’t get to complete my initially-planned route–it would have included a few more sections of new-to-me trail that I’d been wanting to explore. But the nature of running in the woods is unpredictable and ultimately, that’s what I love about it. If I wanted controlled conditions, I’d run on the road or a treadmill. I’ll take 6 miles of slush and rock and bagged long runs over 9 miles on roads any day. While I have some semblance of a “training plan” to work up to doing a trail half marathon by the end of March, I will not sacrifice the experience of exploring new trails or getting outside in tough conditions just to be sure I hit a specific mileage on a specific day.

The trail ahead of me was perfectly straight for a while, the remnants of an old small-gauge rail bed that was used for logging trains. Speculation says that the old growth hemlocks in Alan Seeger Natural Area may have only been spared from logging because the train’s engine blew up and loggers just never got around to finishing the job.

The valley that I was in began to noticeably narrow and as I slowly worked my way northward, I knew that I must be approaching the intersection with Shingle Path. Sure enough, it wasn’t long before I saw the weathered trail sign. The Mid-State Trail continued right, but I turned left, scrambling up a few hundred yards to Detweiler Run Road, a grassy doubletrack that would take me gradually back downhill to where I parked.

The sun was dipping lower in the sky, casting a warm hue over the snow. A few sets of animal tracks and one set of human prints disturbed the pristine surface. I took a moment to soak in the scene before beginning my return trip to the car.

By the time I got there, I was tired. While I probably could have plodded through those 9 miles, maybe today just wasn’t my day.

The ability to adapt is crucial. Roll with the punches and make the most of everything, because there’s always a silver lining. I’m not the greatest at doing so, but I’ll keep working on it. 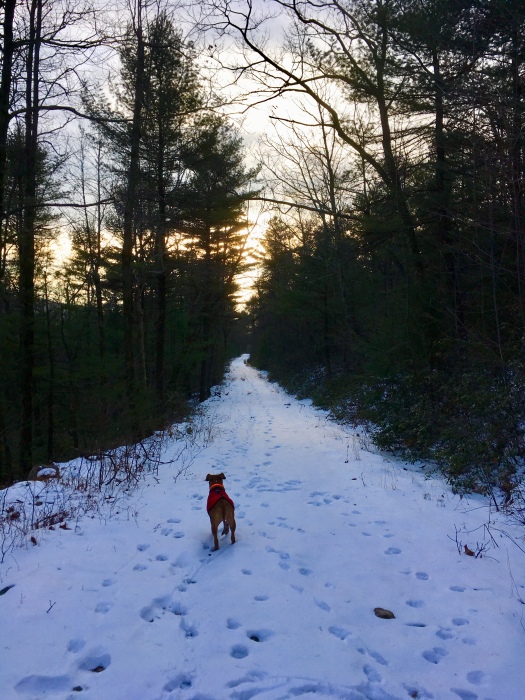