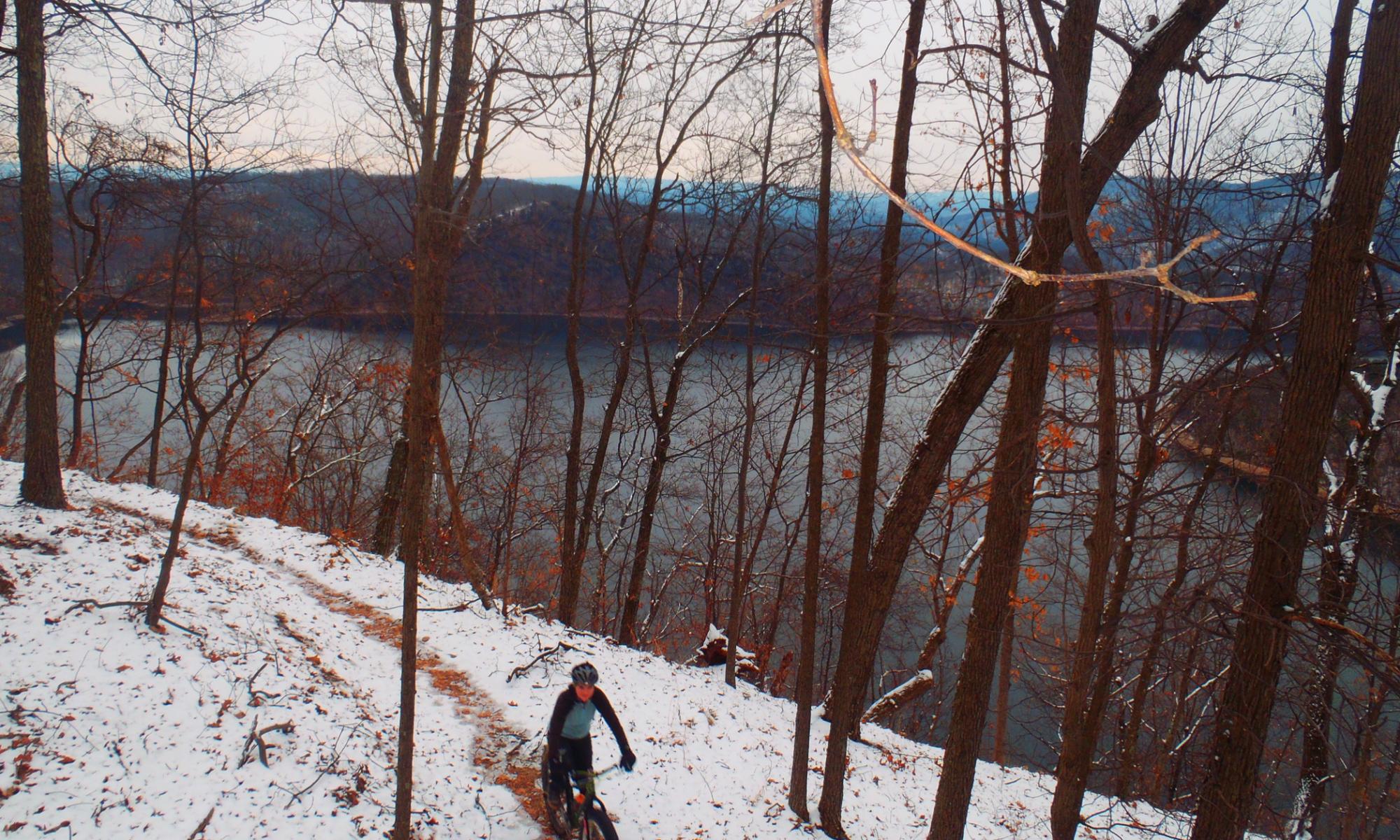 I woke up this morning with a sore throat that felt like it was on fire, the sickness I’d be fighting for the past couple days still hanging on despite my attempts at curbing it with various tea concoctions. Going out into the cold and riding a bike wasn’t exactly the most appealing thing at the moment, but neither was sitting around and focusing on the discomfort. I was going to feel like crap no matter what, so I might as well have fun, right?

So instead of bailing on the planned ride, I suited up, downed another cup of tea, and began to feel better already. Our friend John showed up at 9:30 sharp, and soon after, we were off.

It snowed a little last night, and it’s been chilly (in the low 20s), so the trails were covered by a thin layer of snow and ice that gave a satisfying crunch underneath the tires. The woods were calm and quiet, not another soul around except for perhaps some critters hunkered down against the cold or some deer hiding out and silently waiting for these two weeks of hunting season to be over.

After a slow start (for me at least) on Stony, we decided to do a relatively easy ride out to the vista and back, stopping periodically to admire the winter landscape, talk about tires and the effectiveness of the cobrafists, and check out a very rusted car frame.

John tried to figure out what kind of car it once had been while Evan made various sarcastic remarks about it being the “four-wheeled kind” that “runs on gas.” Both were undoubtedly true statements.

By this time, my feet were feeling a bit frigid. Lately, I had been running flat pedals on my bike and wearing my hiking boots to ride so that my feet stay warmer, but I decided to experiment with different sock combinations for my clips. However, my progressively-numbing toes made it clear that today’s experiment wasn’t exactly successful. Maybe I just needed to ride harder.

But it was easy to forget about my sore throat and cold feet— the views at the vista were stellar, the layer of snow on the ground was beautiful, and it felt good to be outside, exerting myself in the cold air.

Then it began to snow again, and things got even better.

There’s something magical about being in the woods as snow is falling, pedaling through the pines as small white flakes drift to the ground and my heart and soul become awash with a warm and fuzzy feeling. I love snow, and despite the fact that sometimes it can be hard to get motivated to get outside in the colder temperatures, once I’m out in it, I think it is both an invigorating and truly peaceful experience. This morning was no different.

The three of us regrouped at the next intersection and decided to take an alternate route, a small meandering roadbed that dropped us off at the shale pit, before meeting up with the trails again and retracing our route home. Snow was still falling when we reached the cabin, and there was already nearly an inch of fresh power on the ground. But inside, the woodstove was still cookin’ and soon, so was the sausage.

Id’ say the beginning of a great winter in Central PA is well underway.