The past couple of days have been unusually warm, with temps rising into the 50s, and sunny skies to boot. And, lucky for me, I had a rare Saturday off due to the holidays. I took full advantage of this fortuitous combination of events and broke out the Willard for some back-road and gravel exploration. 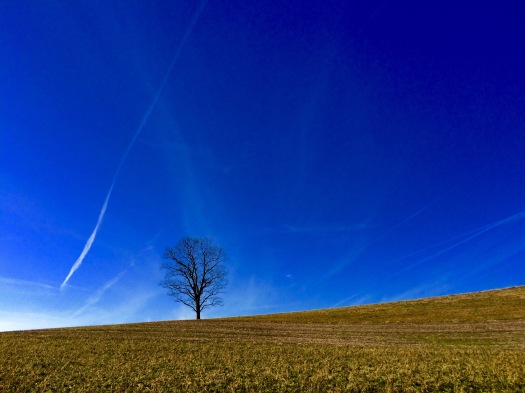 Within a few miles of our house lies Stone Valley Recreation Area and a network of trails and gravel roads that have been, for me, mostly undiscovered. I decided that today was the day to begin familiarizing myself with the area.

I turned off the “main road” onto an inconspicuous, unnamed dirt road that took me up to the top of a funky C-shaped ridge. I saw multiple trails branching off at the summit, and made a mental note to come back and check it out. For now, I continued on my way, back down the little ridge to the sound of distant gunshots (it’s muzzleloader season), past hunting camps, to the hard road.

On the map, I noticed that my route would be taking me past an interesting little knob and a gated road leading to the top. I was intrigued, so I decided to investigate. The road is called Skunk Haul, an intriguing name in itself. Apparently, it was built as a logging road, as the entire top of the knob was devoid of large trees except three enormous evergreens, which were marked “save” on their trunks. These trees stood out like a beacon, and I had seen them from the valley below before even climbing the steep hill to the top of Skunk Haul. The map showed a trail descending the other side of the knob, which I started down, but I was quickly stopped by several large piles of fallen logs. It looked like the trail petered out beyond the log jam, so I decided to turn around and go back down the dirt road from which I came.

From there, I headed to Shaver Creek Road, which I discovered is absolutely beautiful—moss, ferns, sunlight filtering through the trees, the soothing trickle of the stream paralleling the road. And, gated and closed to motorized vehicles for most of the year, except for hunting season. 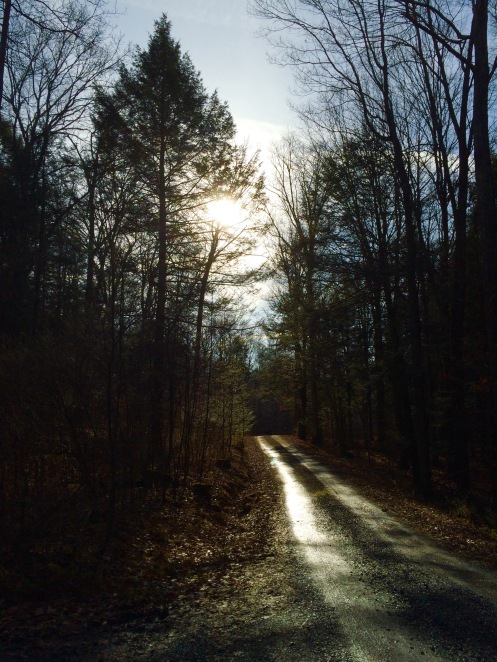 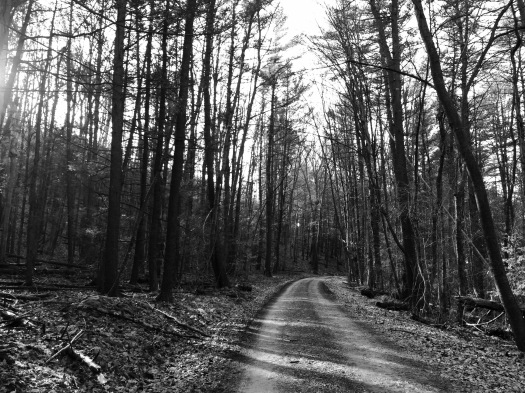 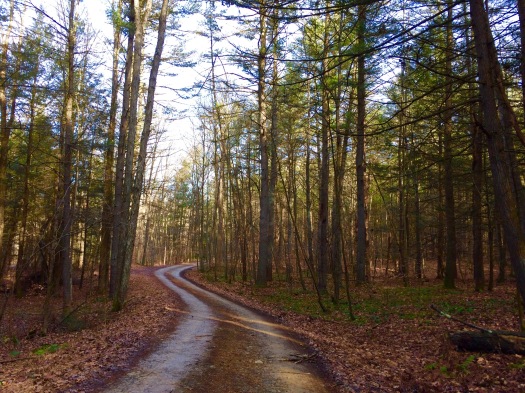 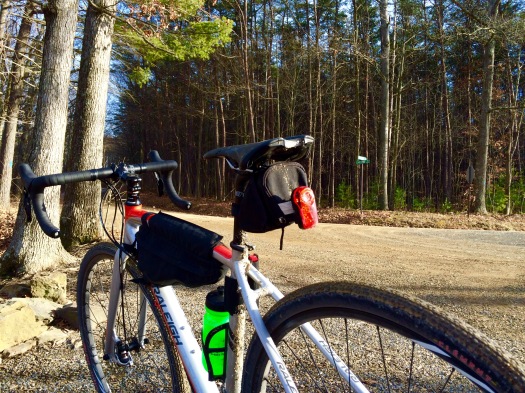 At the end of Shavers Creek Road, I stopped at a vista for a snack and water break, then continued along Scare Pond and Sassafras Roads into more familiar territory, in the direction of Alan Seeger.

As I casually pedaled along, I noticed a sign for the C. Barton McCann School of Art, which I’d heard a lot about (my good friend Erica teaches there periodically), but had never visited. I took a quick detour through the tree-lined drive to the campus, which was quite scenic.

Back on course, it was time to make a decision—take Broad Mountain Road through Greenwood Furnace or the more direct route home. I chose the roundabout way, not quite ready to end my day of exploration, and then found myself making the decision to take another gamble and head home via trail instead of road.

I’ve only recently discovered the Greenwood Ski Trails, and I had only been on a very small section of the network, so I wasn’t sure what I was getting into. I quickly found myself hike-a-biking over a plethora of downed logs and through swampy pools of water. But enough of the trails were rideable that I didn’t totally question my decision to tackle them on my gravel bike.

However, after crossing the sketchiest wooden bridge I’ve ever seen and noticing the piles of logs further down the trail, I wasn’t sure I would make it home by dark. I had a little less than an hour of daylight left, and I didn’t bring a light. My options were to continue on the trail I was on, which seemed very soggy and obstacle-strewn, or hike straight up a steep hill for a short way and hopefully meet up with Brush Ridge Road, which held the promise of being much more rideable on the Willard. I chose the latter.

It ended up being a good decision, and I was able to make it to the gravel of Brush Ridge and then the asphalt road fairly quickly. I pedaled the last few easy miles home as the sun was just dipping below the mountain, bathing the hills to the east in a vibrant shade of purple. 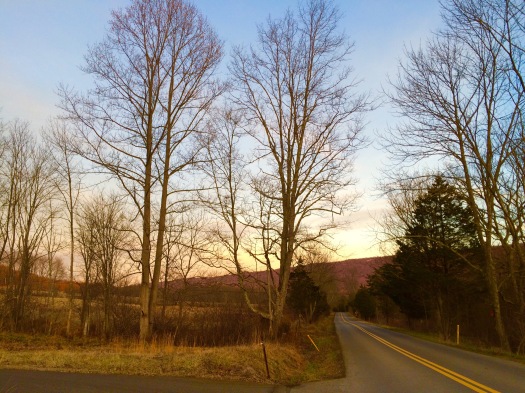 Pennsylvania spring palette.
My favorite 4-legged adventure buddy and I got out for a little run/hike in between heavy rains today.
Just me & my shadow.
Digging out beds for a much expanded garden and got my first seeds in the ground yesterday (kale & lettuce). 🌱During these gloomy & uncertain #coronatimes, I’m finding that cultivating life is very soothing and the idea of growing more of our own food is extra appealing. Work from home means more time to devote to things like this and my upper body is going to be ripped from all this digging. 💪 #silverlinings
A truly #PennsylvaniaGray evening running one of my favorite close-to-home loops without another soul in sight.
Spent the weekend logging miles & Vitamin D. ☀️ Life is pretty scary and weird right now. I’m thankful for many acres of forest just outside my door to keep me healthy and sane while #socialdistancing.
All dat ☀️☀️☀️! Explored some new places today with this fine crew, getting those @theappalachianjourney legs on.
Snow squalls and high winds while exploring some of the game lands behind Toftrees yesterday, working to stay consistent with running even though they’re all short and slow these days.
I love planning routes, poring over maps of places I’ve never been or searching for new ways to link together places I have. From a map, you can get a sense of what a place is like but you never really know until you go explore for yourself, and there are always surprises. That’s what makes it fun. Most of the times, the rides turn out pretty darn good, but this Saturday’s ride was great. 🔥 Cowan’s Gap to the Abandoned Turnpike and back.
Back in the office today but still full of stoke on an incredible weekend in the desert. Stay tuned for bloggage and some articles on @singletracks to come!
Sunrise light at #24HOP. Playing double duty bike racer/journalist meant some sacrificed sleep to capture these moments but it is so worth it to get to do this.
Night laps at #24HOP were super fun! Racers were more spread out, so there were many moments of solitude before coming up on another person. The stars were amazing. Then you get back into #24hourtown and there’s a party happening all night long.
%d bloggers like this: