Spring is in the air, I can feel it. Despite the fact that temperatures have still been way below freezing the past week, something seems a little bit different. The birds are chirping more, the sun feels warmer when it shines, and the weather report confirms that next week, it will indeed rise above freezing, and will even jump into the 40s a couple days. Though it’s not unusual to get snow through March and even a freak storm every now and then in April, I think the deep freeze has finally ended, and soon the winter parkas will be replaced with hoodies, and gloves won’t be a necessity just to walk outside.

But today, as spring is just around the corner, we got a snowstorm. Perhaps not the last, but one of them for sure, and the snow and ice probably won’t stick around too long after this next week. We decided it would be appropriate to do a ride on the lake for our usual Sunday bike adventure, and it couldn’t have been better. A much larger group than normal came out to partake in this unique experience—14 in all, compared to our usual 3-6. The snow began early in the morning, and continued to fall all day. Out on the lake, with a white shroud all around, it looked like we were in a giant snow globe. 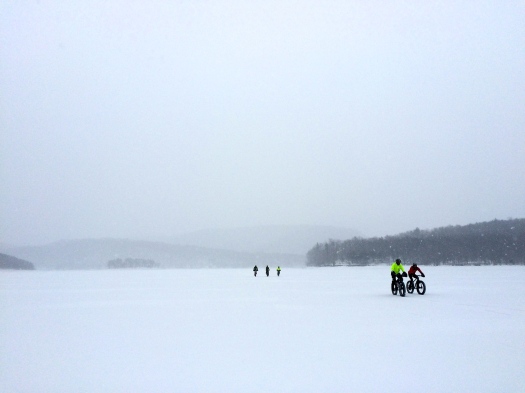 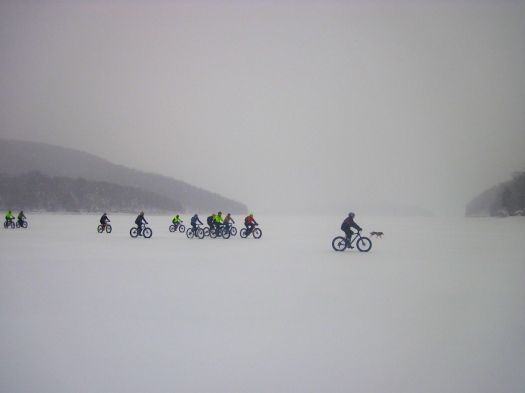 For most in the group, it was their first experience riding on the lake, and first impressions were all positive. Conditions were perfect—a layer of snow covered the ice, so traction wasn’t an issue, and the ice was clearly very solid. We didn’t hear a single peep from it all morning—no cracks or shifts, which is not uncommon even on ice that is fairly thick. The snow was a few inches deep, so there was quite a bit of resistance when trying to pedal through it, but there were enough of us that we broke a good trail and took turns leading. 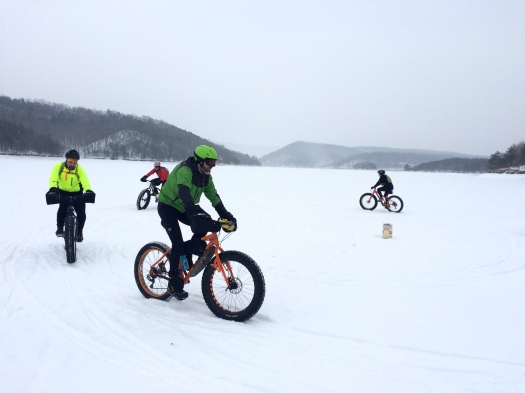 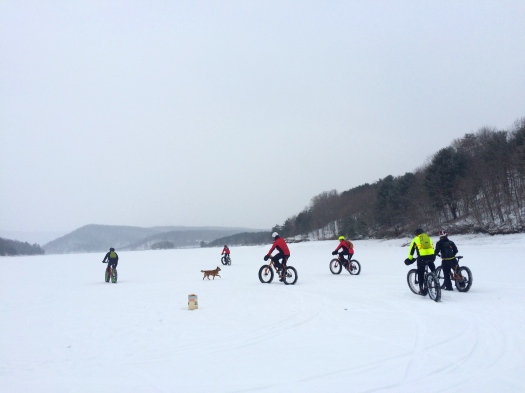 From our start at Backbone Road, we made our way to Pee Wee Island past the Juniata College Field Station, then over to Aitch. The way back was a mix of land and ice as we cut over little peninsulas to come back to where we started, completing a loop of about 7.5 miles. We stopped a lot, hung out on the island, took pictures, sipped flasks of brandy, and enjoyed each others company.

It was great to get so many people out—while I love small, intimate groups, it’s also really fun to hang out with a bigger crowd sometimes, especially those I don’t normally get to ride with.

It certainly was a nice way to ring in March! 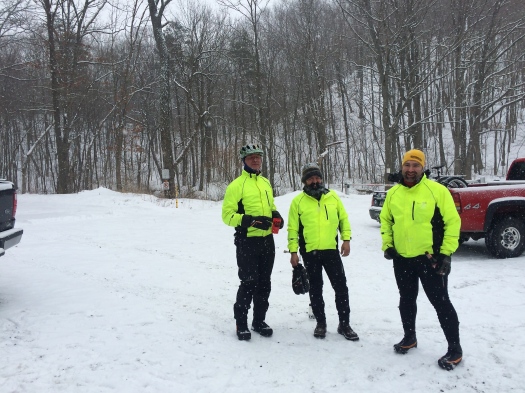 Photos were a collaborative effort between Helena Kotala & Evan Gross.

Frozen tundra up on the Allegheny Front, checking out some windmills and exploring dirt roads and snowmobile trails in the middle of nowhere today. It was tough going at times on the gravel bike but studs made all the difference, as did friends who are game for an adventure.
Cold 🥶 + snowy ❄️+ sunny ☀️ is super beautiful. Opted to ride across town for a meeting rather than drive and definitely did not regret it. Get out there, folks. The cold isn’t so bad, I promise.
Snow globe! ❄️ Also had the pleasure of showing @_whit_green_ & @benbarbarian one of our favorite local loops. I couldn’t stop smiling today. 😁
Foggy bike shuttle to paddle Stone Creek again this past weekend. The warm air moving in and mixing with the cold created very distinct air pockets that I passed through on my ride.
This photo is not at all representative of what we rode yesterday (mostly many more rocks with many more people), but I was having too much fun to take photos. First time riding MTB in Michaux and I am already dreaming about going back and working on cleaning lines. Happy birthday @tmongold1 and thank you @stevemongold for organizing such a fun day!
Snow day! ❄️ Enjoying it while it’s here. The mild temps have been nice but I’m ready for some real winter and more playing in the snow!
The clouds this morning... 🔥
First paddle in a while this past weekend, first time on Stone Creek in a few years. I could get used to doing this more regularly again.
Got the @baronvonfancypants treatment yesterday, with new trails and roads and a history lesson along the way.
Kicking off 2020 chasing the sun & my favorite person around the local goods.
When @moshannonshannon suggests McCool... always do McCool. 😍
Taking advantage of some December warmth and sunshine! ☀️
%d bloggers like this: