The day was clear, sunny. Warm, but not too hot. Friends arrived just as I was finishing up my morning coffee. Brent, ready to go as usual, in all his cycling garb. Jake, still clad in the flannel that he slept in, the alpacas running down the hill to greet this strange-looking, long-bearded, plaid creature. And Jalon, stumbling up the driveway, styrofoam coffee cup in hand, still half-asleep. 10am was apparently too early for him on a Sunday.

We set off for Rothrock State Forest in two cars, bikes hanging off the tailgate of Brent’s truck. All Salsas. “All we need’s the chips,” remarked someone. I don’t remember who. 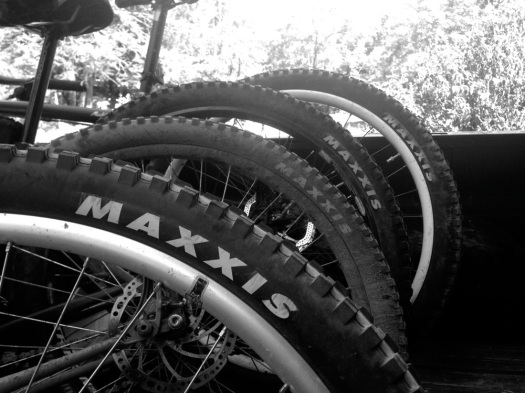 A road closure caused us to take the long way around, and we were nearly an hour late meeting Allison in the parking lot. Luckily, she didn’t mind. We rolled in, smoke pouring out of the hood of Brent’s old Chevy from a power steering fluid leak. He laughed it off.

We began. A slow, rocky uphill crawl to the top of the ridge. I was tired, still recovering from the illness that’s plagued me for the past two weeks. Sickness in the summer sucks. It’s been going around lately, it seems.

I asked Brent multiple times if he wanted to pass me. He said no, he liked my pace.

But despite my burning legs, my technical game was on. I cleaned my only unconquered rock garden on the Tussey Mountain Trail. Success felt so good.

The berries were thick on the ridge, spilling onto the trail, the thorny bushes scratching our arms and legs. Jake stopped to clear some of the more gnarly ones, and Jalon took the opportunity to forage. We joked about stories we could tell people to explain our bloody scratches. Maybe we were attacked by a gang of bobcats.

Jake took us to what he called the “Toilet Bowl,” a circular cutout in the earth. We rode circles inside of it. It was dizzying, but so much fun.

We continued, down the mountain this time, on one of my favorite trails. It was sandy, mountain-laurel-lined, with a number of small drops. And at the end, a perfect stream crossing.

We stayed at the stream for a while, riding back and forth, giggling. I felt like a little kid. It was impossible not to laugh from pure joy. Jake rode wheelies. Jalon somehow fell over in the middle of the stream. 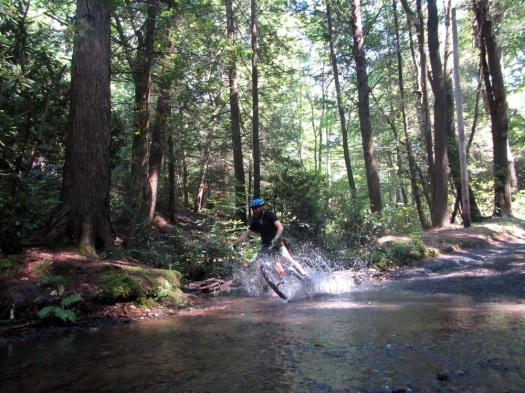 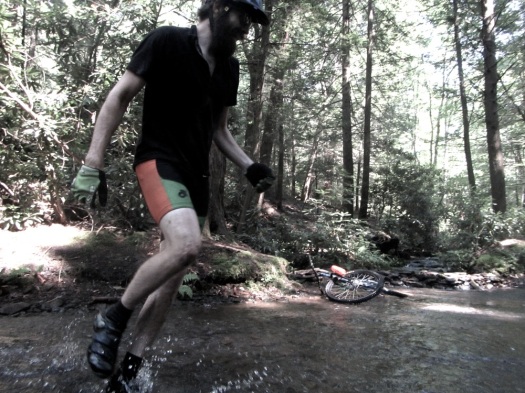 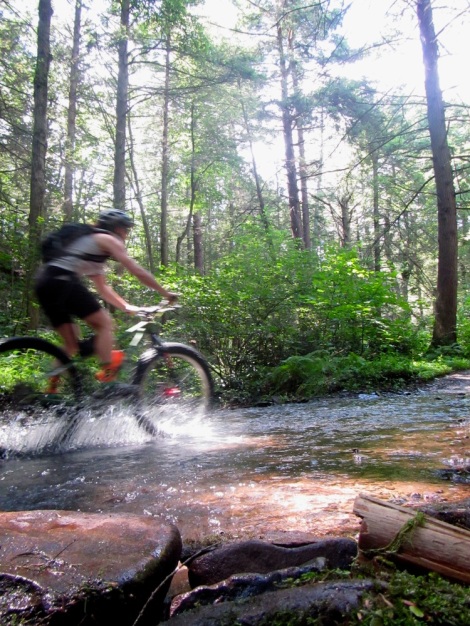 Soaked, we coasted to the car our way back to the car, and stopped for ice cream on our way home.

One Reply to “Berries, splashes, giggles.”

New adventures in a familiar backyard.
Pennsylvania spring palette.
My favorite 4-legged adventure buddy and I got out for a little run/hike in between heavy rains today.
Just me & my shadow.
Digging out beds for a much expanded garden and got my first seeds in the ground yesterday (kale & lettuce). 🌱During these gloomy & uncertain #coronatimes, I’m finding that cultivating life is very soothing and the idea of growing more of our own food is extra appealing. Work from home means more time to devote to things like this and my upper body is going to be ripped from all this digging. 💪 #silverlinings
A truly #PennsylvaniaGray evening running one of my favorite close-to-home loops without another soul in sight.
Spent the weekend logging miles & Vitamin D. ☀️ Life is pretty scary and weird right now. I’m thankful for many acres of forest just outside my door to keep me healthy and sane while #socialdistancing.
All dat ☀️☀️☀️! Explored some new places today with this fine crew, getting those @theappalachianjourney legs on.
Snow squalls and high winds while exploring some of the game lands behind Toftrees yesterday, working to stay consistent with running even though they’re all short and slow these days.
I love planning routes, poring over maps of places I’ve never been or searching for new ways to link together places I have. From a map, you can get a sense of what a place is like but you never really know until you go explore for yourself, and there are always surprises. That’s what makes it fun. Most of the times, the rides turn out pretty darn good, but this Saturday’s ride was great. 🔥 Cowan’s Gap to the Abandoned Turnpike and back.
Back in the office today but still full of stoke on an incredible weekend in the desert. Stay tuned for bloggage and some articles on @singletracks to come!
Sunrise light at #24HOP. Playing double duty bike racer/journalist meant some sacrificed sleep to capture these moments but it is so worth it to get to do this.
%d bloggers like this: