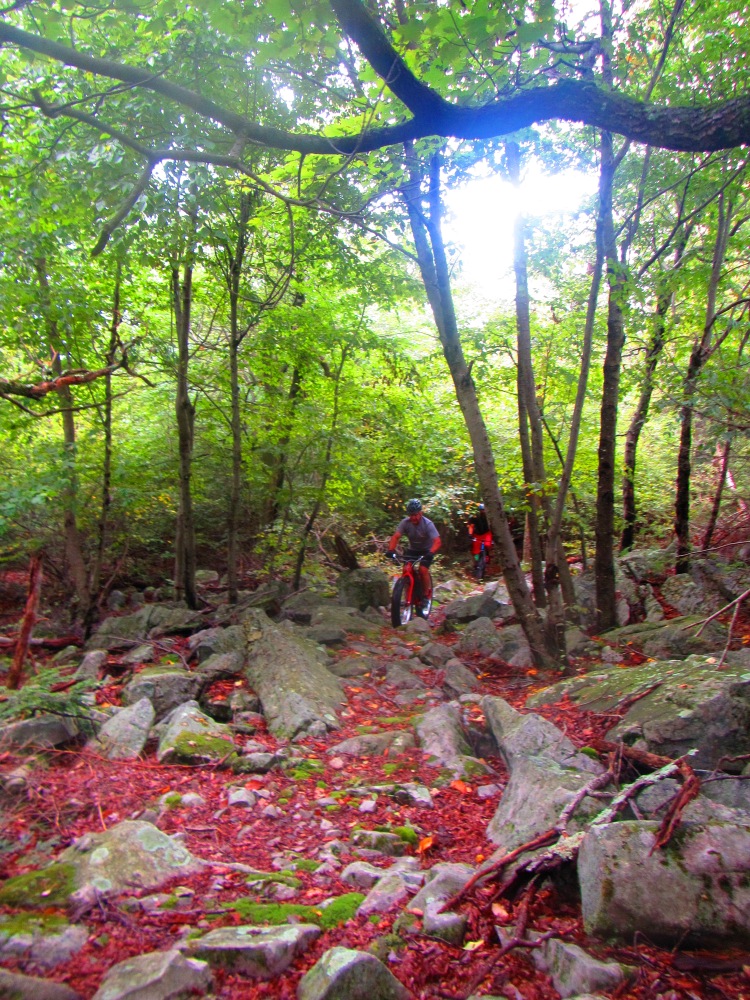 Fall is just about here. My favorite season, for so many reasons—the crisp air and clear skies, warm days and cool nights, the turning of the leaves, and, probably most importantly, the end of the busiest season for those of us in the business of outdoor recreation. Fall means I get to go on adventures with Evan on a regular basis again. It means longer rides and exploring new territory.

The shop is usually closed on Sundays, except for in the summer. Yesterday was the first Sunday it was closed again. So we went somewhere we’d never been before.

John, Brent, and Jake joined us, John surprising us with muffins when we met at our house. We decided to park at Reeds Gap State Park, where we would begin and end a 25-mile loop of entirely new-to-us trails and fire roads. I shivered as we milled about, donning our bike clothes and airing up tires. This would be the first time I’ve had to start a ride cold in a while, with the exception of when I was at altitude in Colorado (more on that still to come).

But we warmed up quickly. Right off the bat, we were climbing and then hike-a-biking up a mossy gorge. We pushed our bikes for what seemed like a long time, but the surroundings were so pretty, it was hard to complain. 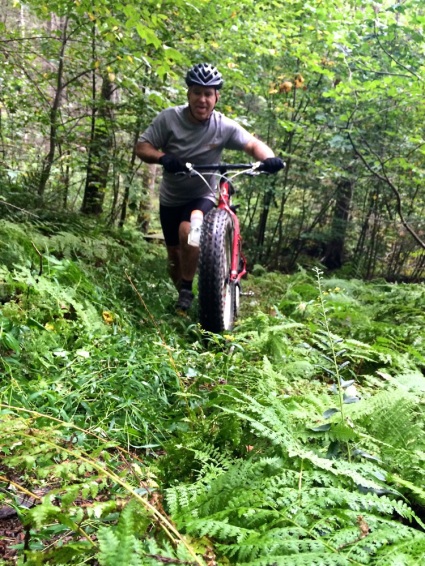 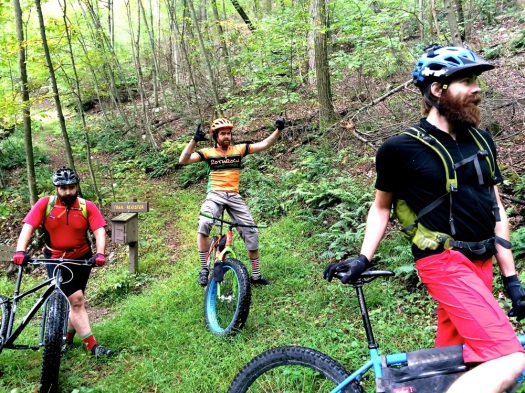 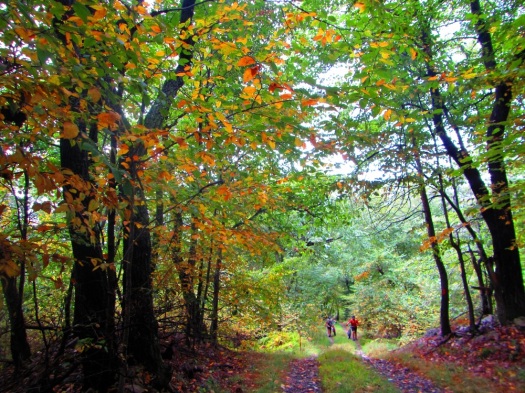 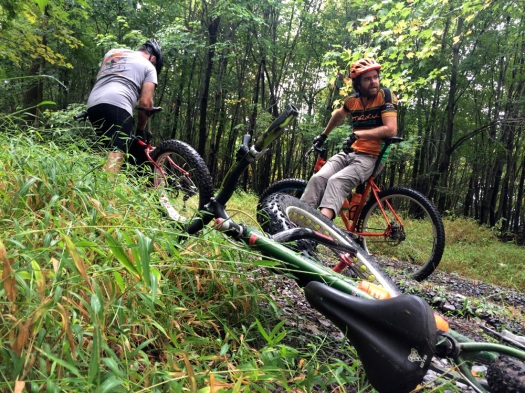 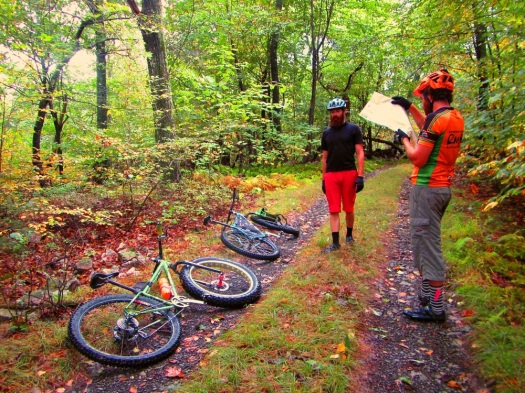 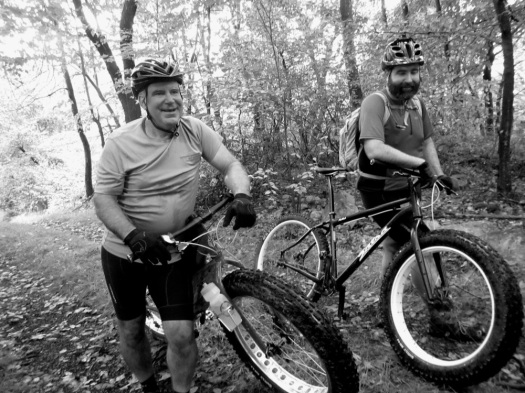 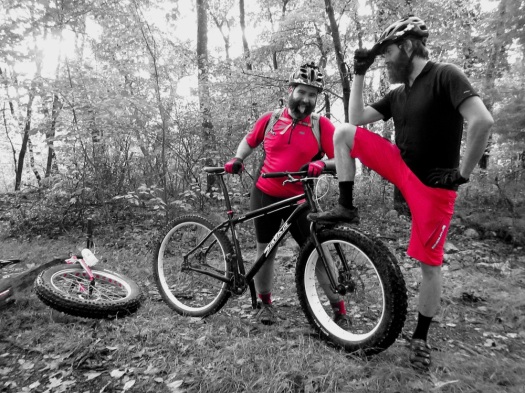 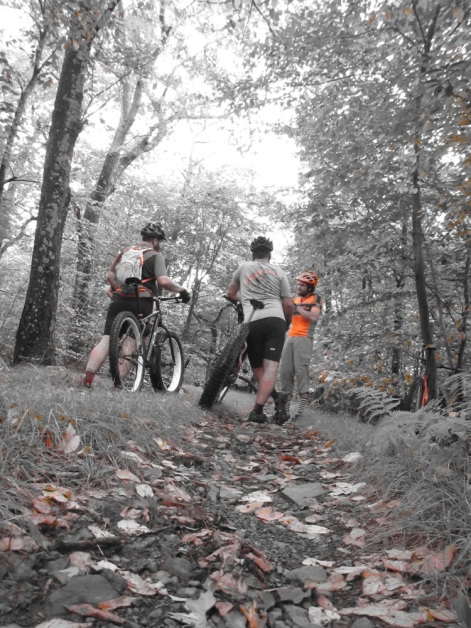 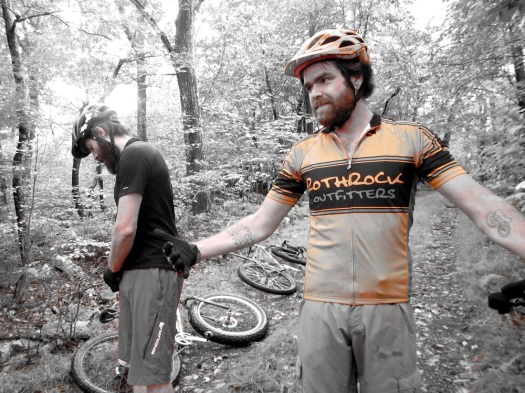 Eventually, we emerged back on the dirt road, and climbed some more, all the way to the top of the mountain on High Top Trail. It began as a rough gravel road and climbed steeply for quite some time. I strained my way almost all the way to the top, but lost traction in a rut and walked the last little bit. All the way at the top of the mountain, the 4×4 road turned into overgrown singletrack.

The trail was pretty rocky in most places, and many of the rocks were obscured by the vegetation growth. Clearly, this was not a well-traveled path. We wondered how long it had been since anyone even walked this trail, much less biked it. There were many sections that were unrideable due to both the sheer number and size of the rocks and the plants covering them that made it impossible to pick a line. We walked a lot.

But the sections that were rideable were awesome, and after the first mile or so of frequent hike-a-biking, most of the rest of the trail was navigable with decent technical skills. 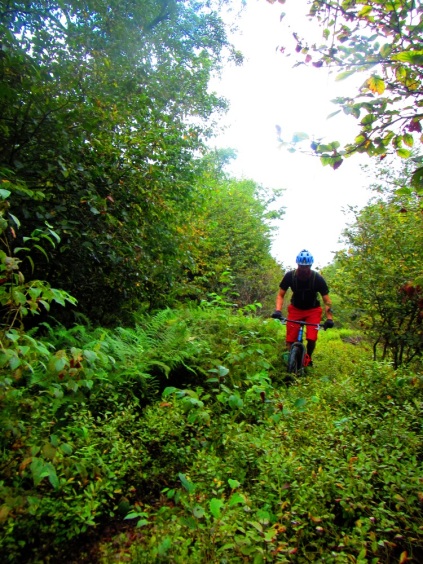 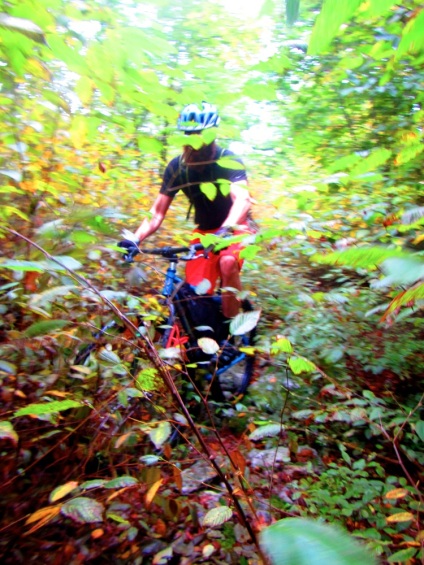 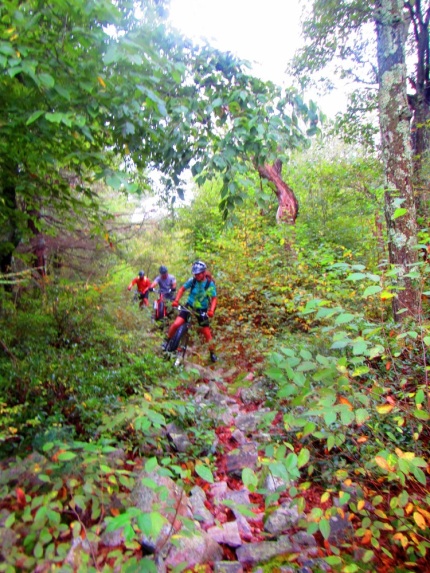 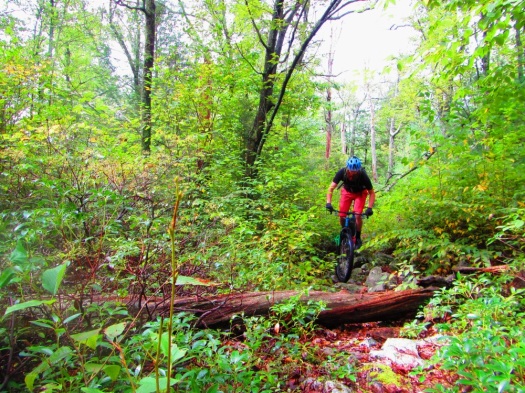 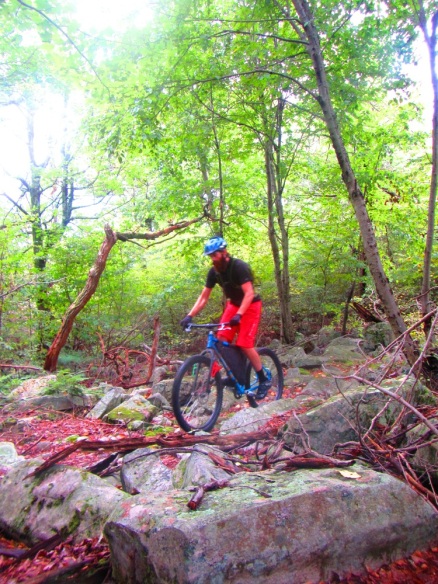 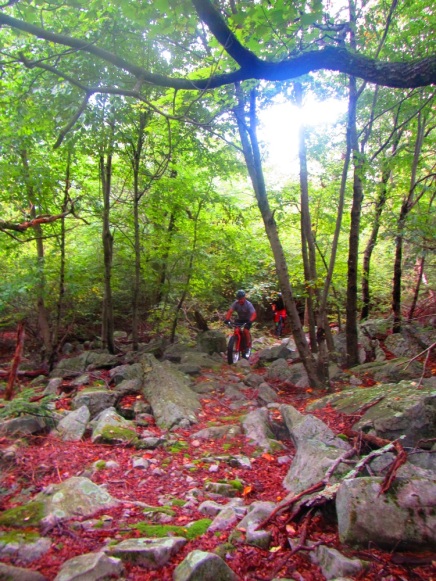 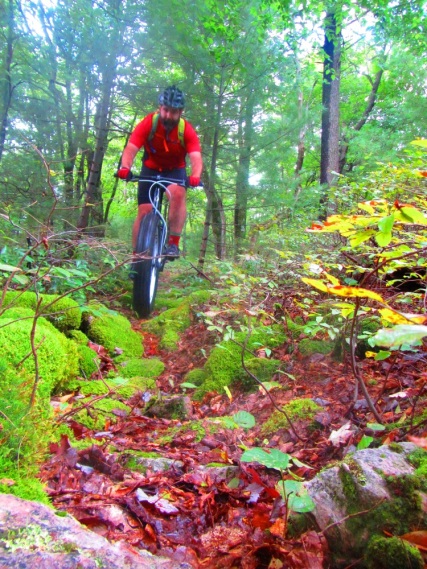 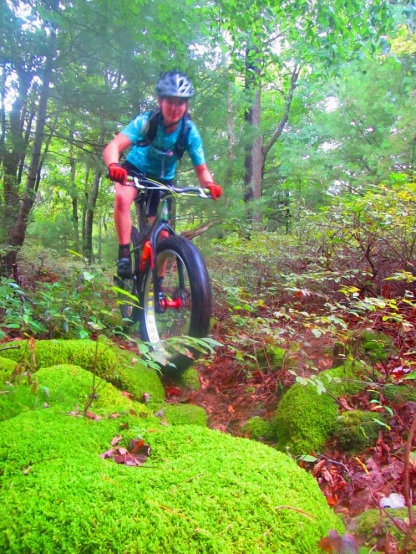 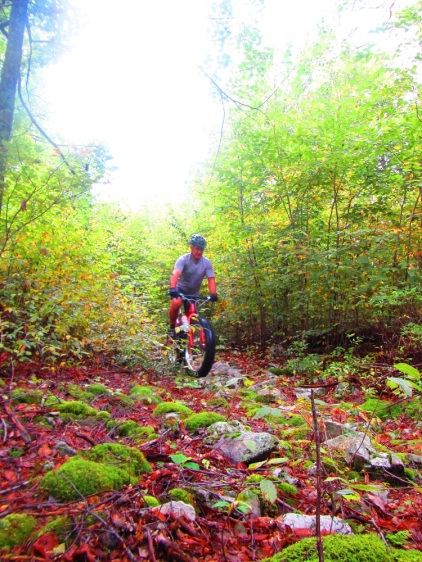 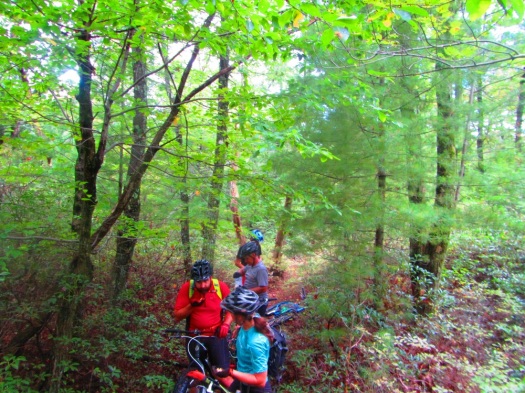 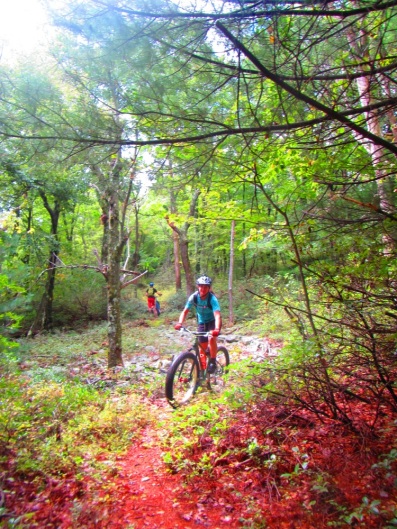 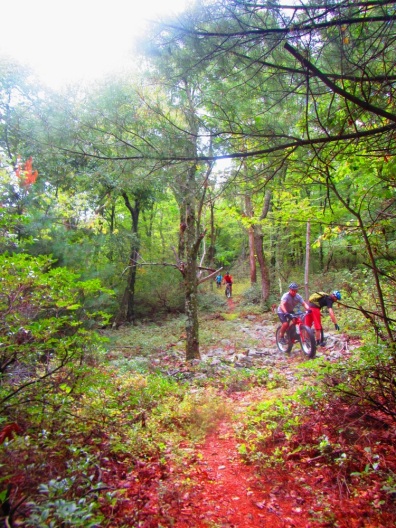 After 3 years of riding regularly, I finally feel like things are clicking when it comes to picking my way through the rocks, something we have plenty of in Central PA. I remember how much I used to get off my bike and walk. Lately, I’ve been riding entire trails in Rothrock without a dab. It’s such a good feeling, to see tangible progress. And riding is more fun when I can actually ride through and over things instead of walking.

I impressed myself yesterday. I made it through many of the rock gardens we encountered, no problem. I felt like I was floating. Not to say it was easy, but I could tell that I was getting it. I finally feel like a good mountain biker. 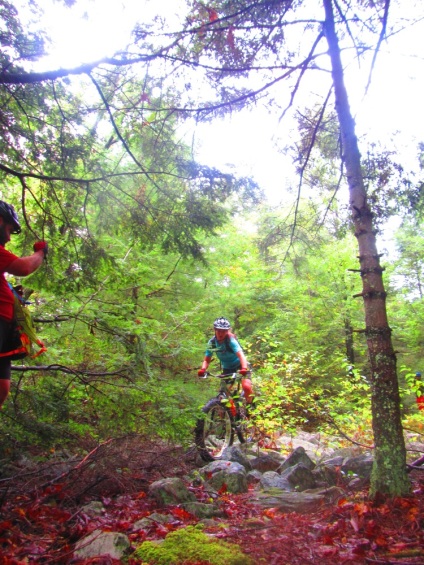 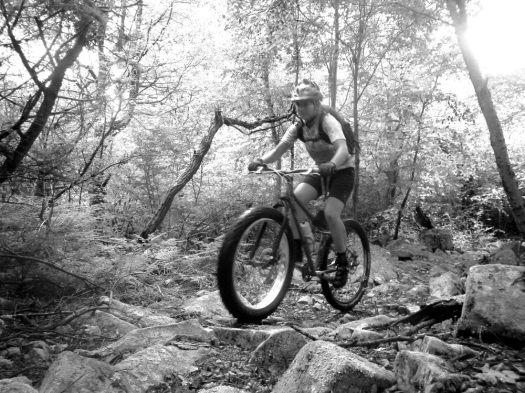 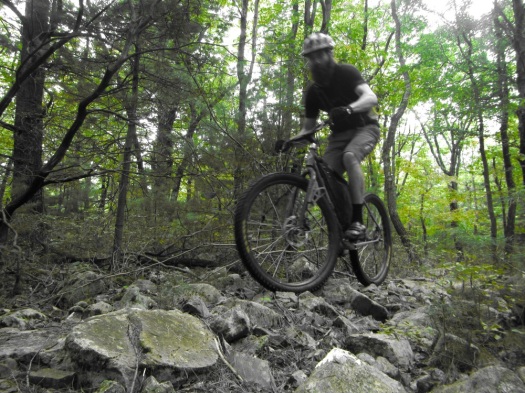 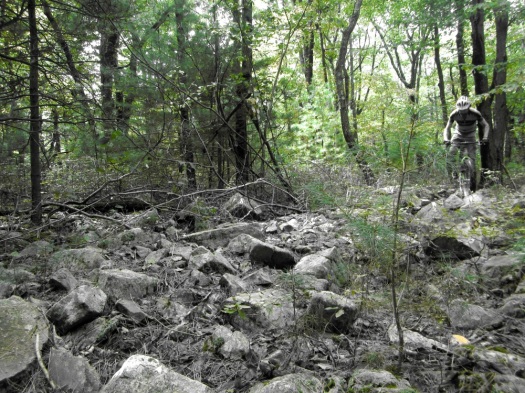 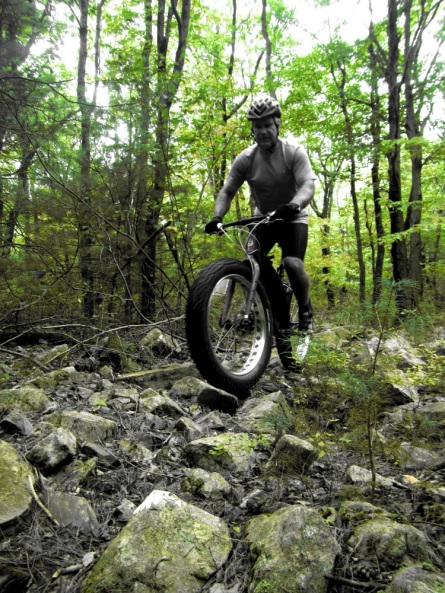 High Top Trail gave us the best of everything. Rocks, roots, moss, pine needles. Really technical sections and pretty smooth sections. Aside from the first overgrown, super rocky section, there were only a couple other significant sections of trail that required dismounting our bikes for a longer period of time.

High Top Trail turned into Thick Mountain Trail for a few more miles, and then we descended off the mountain via the chunky, rutted dirt of Old Lancaster Valley Road. Everybody else flew downhill, but I took my time. I wasn’t in a hurry. I caught them at the bottom, where Brent was fixing a flat. 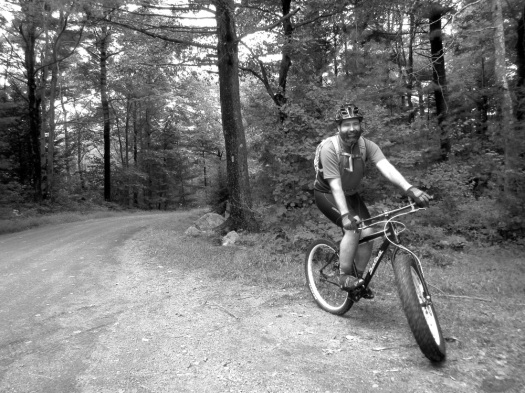 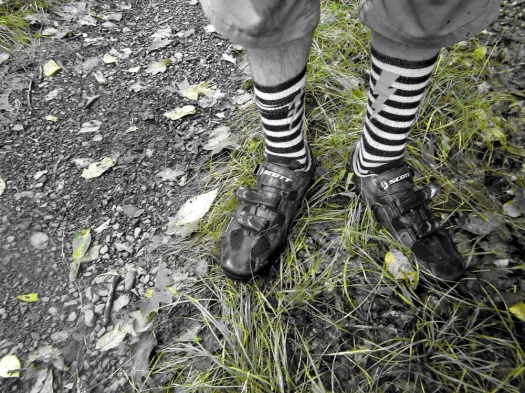 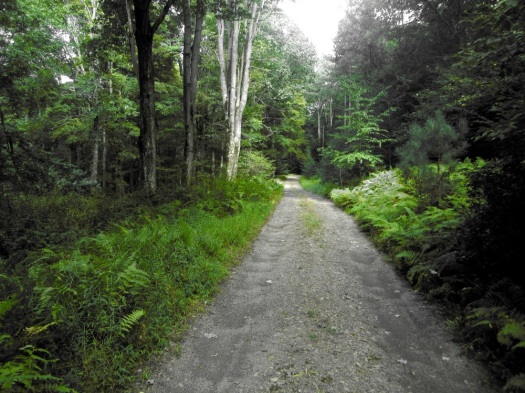 We hopped on the hard road and took it all the way back to the park. It was easy pedaling. I was a lot less tired than I expected. Our ride didn’t include that much climbing, but all the rocks and technical sections and hike-a-biking used to wear me out a lot more. I put my bike in the highest gear, pedaling hard for a while and then coasting. Evan rode next to me. We talked a little, but mostly were quiet, just admiring the scenery and enjoying the moment. I was happy that we could share this experience. I’ve missed us riding together.

And I marveled at how much I’ve come to enjoy this type of riding. Total exploration, not knowing what’s up ahead. Possibly pushing or carrying your bike up things and over things. Maybe finding great trail, maybe not, but almost certainly finding cool spots you’d never have gone to otherwise. I used to like it, but it also frustrated me. I wasn’t as strong, and I wasn’t as good at riding on stuff other than relatively smooth trail. And so, I used to walk a whole lot more. Now, I love these kinds of rides. Luckily, there’s a whole lot more to explore.

2 Replies to “In the spirit of exploration.”