For a while, I was convinced that I’m not a people person. Large crowds freak me out. I need plenty of alone time in my life to feel sane. A lot of people tend to sap my energy. In the extrovert/introvert scale of things, I’ve always pegged myself as an introvert.

I think the key is finding the right people.

Luckily, this select crew of people keeps growing, and I am finding myself surrounded by those who “get me,” and with whom I can totally be who I am. No facade, no faking it, no walls.

It’s the best group of friends I’ve ever had.

Being 100% comfortable means that spending time with those people invigorates me rather than depletes me. I may not be a huge people person, but I’m not a loner either. Though I do need “me time,” I also know that many experiences are better when shared.

At the end of last week, I was feeling pretty blah. I have no other good way of describing it. I felt drained, physically and mentally, with no clear reason why. I felt uninspired and unmotivated. I had off, and Evan had to work long hours, so I was home alone all day.

I probably needed to ride my bike. So I did. It was a great ride. The weather was perfect. I explored some new dirt roads and then found myself worrying that I would get shot at (it’s the middle of deer season here in PA, which basically means going out into the woods on any day but Sunday probably isn’t the best idea in the world). But my brain never really got into it. I couldn’t shake the to-do list that taunted me, or the strange, unsettled feeling that lingered in my gut.

Yesterday, however, fixed me. A great ride with a small crew, on some of my favorite trails in Rothrock State Forest (Wallace, Sassafras, and Pigpile). The weather was perfect. The morning started out cold, with a layer of frost covering everything in sight as we made the short drive to Greenwood. But it warmed up quickly, and the sun came out. We even saw the first snow of the season up on top of the mountain (just small patches here and there, but it still counts).

It was a leisurely ride. We’d stop often, and spend time chatting before jumping back on the bikes to ride to the next intersection. On a lot of group rides, we all get pretty spread out as the fast guys take off and the rest of us fall behind until we all regroup. But this time, we stayed together most of the time, gabbing our way along.

The view from the vista on Pigpile was amazing. Big Valley was still fogged in, at 2 o’clock in the afternoon. We were on top of the clouds.

I often think that to get my head straight, I need to be alone. This time, being with some great people doing something we all love together was just what I needed. 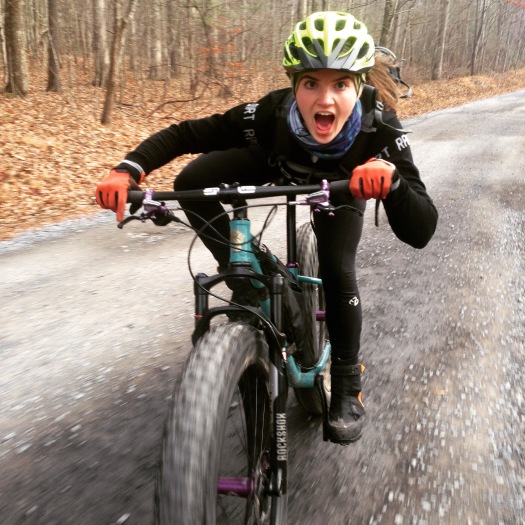