I taught Evan this word as we were doing an impromptu hike along the Mid-State Trail yesterday. Basically it describes body awareness while in motion, such as knowing where to place your feet while running through rough terrain. Having good proprioception means not tripping on a rock and falling on your face.

An essential skill for hiking the ridges in central Pennsylvania.

Hiking is outside the recent usual realm of joint activities for Evan and myself. We both used to do it a lot more but have been much more bike-focused lately. I go for hikes every now and then, once every couple weeks, almost always solo, and hardly ever very far. Having the company of Evan and Dinah Dog, and spending 5 hours on the trail putting in a little over 13 miles, was a nice change of pace.

We had planned on going for a long bike ride, but when we looked outside at the howling wind and swaying trees, we both thought maybe riding on the road wasn’t going to be the most fun thing to do. We waffled for a little while longer. Should we do a shorter ride? Should we go ride mountain bikes instead?

I casually suggested a hike with Dinah, and the ball started rolling.

The cooler temps were a welcome reprieve from the high 80’s we’ve been experiencing lately. Being chilly had never felt so good. We made a second French Press full of coffee, filled our travel mugs, and got in the car for approximately 10 minutes before arriving at Pine Swamp Road, where we began our hike on the Ironstone Trail.

From the gravel road, the trail heads uphill, briefly following a primitive, grassy drive that leads to a camp. We missed where the trail turns off the doubletrack, ending up all the way at the cabin, so we hiked back down and found the singletrack.

Our pace was brisk. I heated up quickly, pulling off my long sleeves. Then it started to rain, so I put my shell on. The weather was as indecisive as we had been earlier about our plans for the day. It got sunny again, and I took the shell off again, stashing it away for the rest of the day.

Trying to keep up with Evan and his long legs required some jogging on my part. We danced through the rocks. My legs felt alive. Having someone to keep up with pushed me, in a good way. We cruised through ferns, swampy sections. We talked a lot about hiking, speed hiking, rather. Not just strolling through the woods, but trying to hike as far and as fast as possible. We talked about trying to do things like the entire Standing Stone Trail (72 miles) as quickly as we could. Maybe in one shot?

We talked about how doing more hiking is a good way to get to be active with Dinah. She doesn’t do so well with trying to keep up with bikes anymore, unless it’s a really short ride. She burns herself out too quickly. But fast hiking/slow running is the perfect pace for her.

We talked about trying to do at least one good long hike a week with her, while she is still able. She’s 9 this year. Not old yet, but getting up there for a dog. 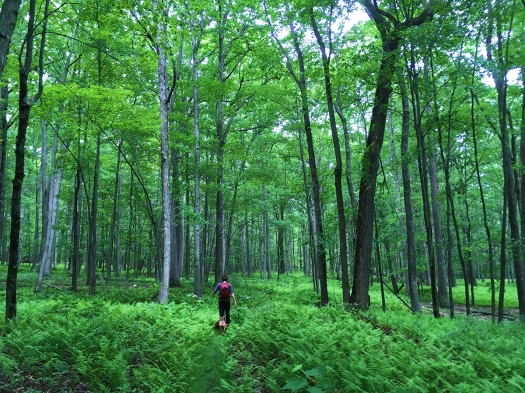 The trail turned left and we headed straight up the mountain.

I felt better than I have in a long time while on foot. My calves didn’t cramp up immediately like they have been so much lately. We pushed to the top without stopping.

At the top, we headed left on Jackson Trail, which follows the ridgetop to Rt. 26 before hooking back up with the Mid-State. I was almost sure we’d see a rattlesnake (this is prime territory), but it might have been a little chilly and damp for them. 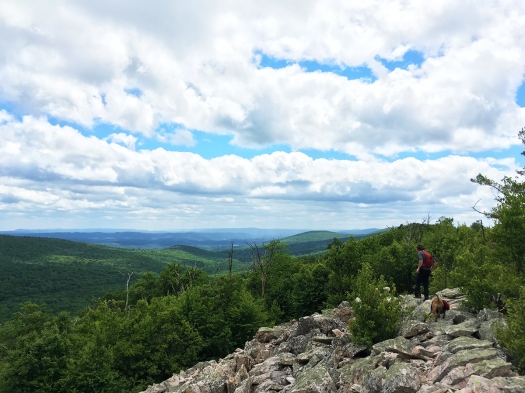 The vistas were, of course, incredible. The skies cleared a little by the time we got to the top of the mountain, and though it was still very windy, the threat of impending storms seemed to have passed. We noted the layer of lichens covering the rocks. Rumor is that they glow green at night. I think we’ll have to come see for ourselves one of these days.

By the end of Jackson, we were at mile 8, and my knees were starting to feel it. I have been struggling with knee issues for the past couple of years, for no apparent reason, which is a little frustrating. They feel fine when I bike, even long distances, but if I run more than about 5 or 6 miles, the pain flares up. But I am hopeful that with more consistent stretching, and working my way up to doing longer miles on foot, I’ll be able to minimize the issues.

But, there wasn’t enough pain to cause alarm, so I pushed through.

We crossed 26, and continued on the ridgetop, deciding to go even farther than we originally planned. Dinah was doing well, and though I was starting to feel some effects of hiking/jogging farther than I had in a long time, I was still feeling great too. We passed our original route down the mountain, Campbell Trail, and set our eyes on the Indian Steps. 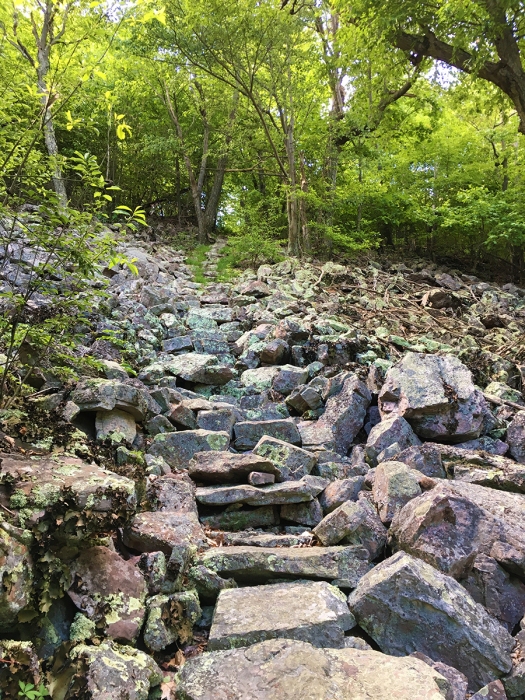 I can’t seem to find any info on the origin or story behind these steps, when they were built or why. The mountainside is so steep here that they are almost necessary, and they certainly make the going easier (but far from easy!).

The steps were steep and the going was slow, but we reached the road pretty quickly. Then it was a nice and easy power-walk on gravel most of the way back to the car. The final mile was on Lowery Trail, a doubletrack snowmobile trail paralleling Rt. 26 as it makes its way down the mountain from Jo Hays Vista towards Stone Valley. At the powerline cut, we found some interesting plants with a mix of pink and green leaves. I’ve never seen anything like it.

We made it home in plenty of time to jump on the tandem and pedal over to McMurtries for some wings and a pitcher of Dales Pale Ale to celebrate a good day on the trails.