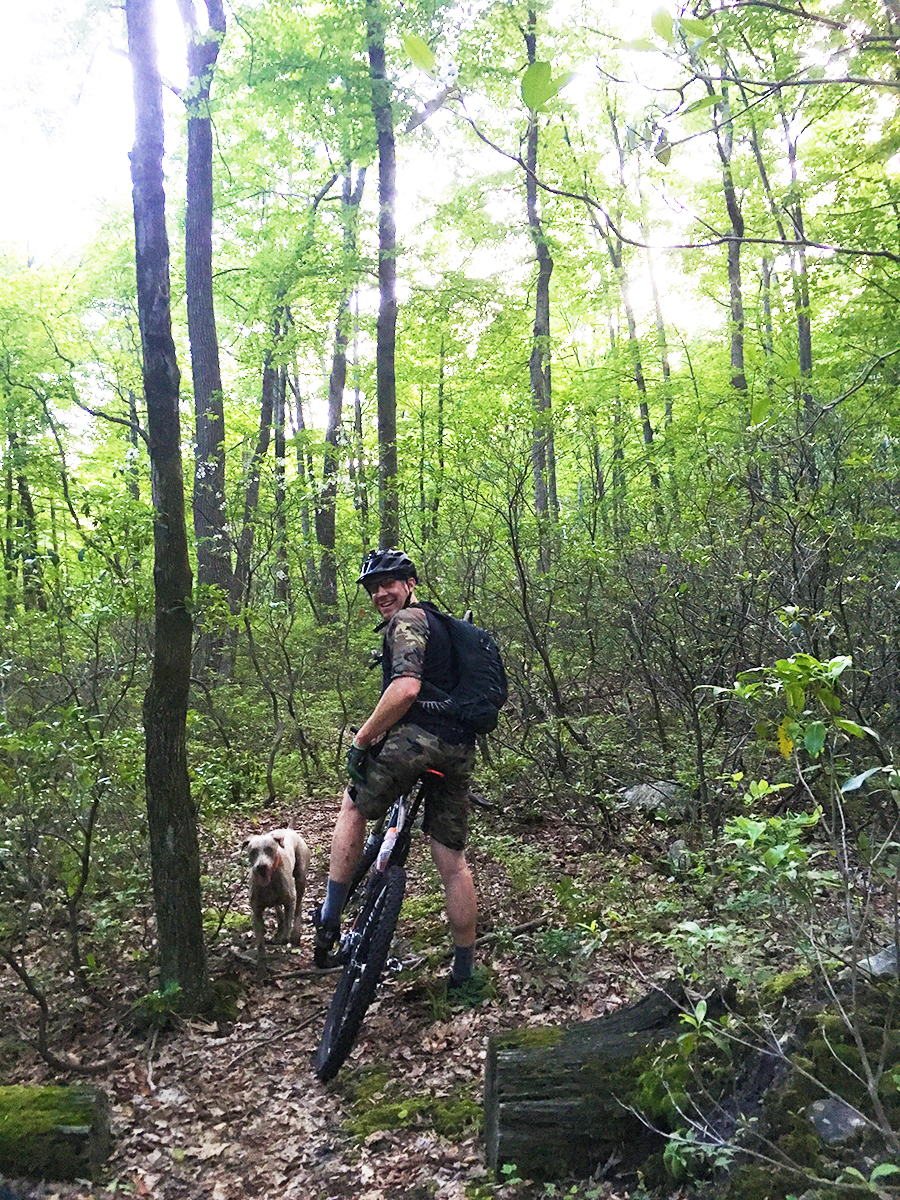 Summer evenings are my favorite. The heat fades, the sun becomes less intense, and, my favorite piece of all, it’s light until 9pm (or later, around the solstice). I love daylight. When I was in Alaska in the summer and it was light almost all the time, it was heaven. I know they make lights for a reason, but I don’t particularly like using them. I like being able to see everything around me. I love being able to go for an evening bike ride in the daylight.

On Thursday, Evan texted me from work about riding Coopers Gap. Our friend Levin bought a new bike—a brand new Salsa Pony Rustler—and he was going to come along and test it out. I scrolled through my phone and typed messages to other bike-loving friends. In the end, we got a good crew together, including Jalon, whom I hadn’t ridden bikes with in way too long.

We got to the lot late, and Ryan and Levin weren’t there yet. We wondered if we’d somehow missed them. Ryan is usually prompt. Just as we were getting ready to go ride anyway, they pulled in, quickly prepped, and then we were off.

I hammered quickly up Chestnut Springs, pushing a little harder than I usually do off the bat. I’m slow to warm up, but I’ve been trying to work on digging a little deeper from the get-go. It hurt, but felt good.

Down Lingle, I was flying. I got some air off the drops. Having a suspension fork really helps on the downhills, and since I’ve been riding with it a whole lot more as of late, I can see a noticeable difference in my riding style on the descents. I have learned to love letting loose and tackling technical sections with a lot more speed than I used to. I’m getting a whole lot better at high-speed cornering too, which has made a world of difference when it comes to maintaining flow.

Splashing through the streams at the bottom felt so good—always a treat on a warm day.

Up Otter Gap, I was killing it. I was almost all the way through one of the rock gardens that I’ve never been able to clean in the past before I even realized that I was in it. I was focused, staring ahead. Just keep pedaling.

Up the “rock sidewalk” into the next troublesome garden. Evan and Ryan were stopped, pulling their bikes to the side of the trail to let me pass. I barely paid attention, still focused only on the rocks. I cleaned that one too.

No dabs yet!, I excitedly proclaimed. You better not have!, was Evan’s reply.

I could barely contain my excitement. I had just cleaned two rock gardens that I’d never cleaned before, back to back.

I entered the wet section, basically a stream running down the middle of the trail. This part always trips me up too. I made it through the mud bog, barely, made it past the intersection with Penn Roosevelt Trail, and then my wet tires slid out. Dab #1.

Damn, I was starting to think I’d clean the whole trail! That would have been something.

But if I’d done that, I’d have nothing to work for next time. One more foot down when I missed the trail entirely and had to make a sharp turn to get back on it. I let Evan pass me again. I cranked all the way up to the top without another dab. Only two on Otter Gap ain’t bad at all.

I am still really excited about this, actually.

While I feel like my strength has plateaued a little (I have a plan to work on that), my technical game is steadily improving, and I love it! There is no better feeling than smoothly making it all the way through a rocky chunk of trail that has given you so much trouble in the past. More skills=more fun. And no matter how good I get, there will always be new challenges to work on.

We stayed in a tight line across Brush Ridge. The trail is narrow and grown-in at this time of year. At the intersection of Indian, we stopped, expecting to take it back to the road. Ryan suggested a different plan. There’s a newer trail that runs from the road all the way back to the deer fence, and eventually the lower part of Indian. This would allow us to finish out Brush Ridge, and then take trail back instead of gravel road.

We were still tire-to-tire, across the tiny wooden bridges, one of which is becoming quite decrepit, off-camber, slightly broken. I think if I had been alone, or not quite so close to Shannon’s giant rear tire, I might have chickened-out. But there was no stopping. Levin was right on my tail as well. He saw what we were about to do and screamed. Fuck!

Levin is the only person I know who complains constantly on a ride but still has the best time of his life. It’s hilarious, really. Normally, no one likes a whiner. But Levin doesn’t whine; he basically just says what the rest of us are thinking, and makes it sound funny and endearing. I hadn’t ridden with him in forever, and I missed it.

We all made it over the bridges, and it was a good thing I didn’t have time to think about it. My biggest enemy is often my own head telling me that I can’t do something. I love closely following riders who are slightly better because then I’ll usually just follow them through stuff that I might second-guess normally, and I’ll wind up doing things I usually wouldn’t, out of fear. It’s exhilarating. And it rarely ends with me falling on my face. That usually happens when I overthink a move, and then try it. Of course, there are always exceptions.

Speaking of falling on faces, Ryan did a pretty graceful over-the-bars move in front of me just after the bridges. Luckily, neither him nor bike were too banged up.

We jumped on the gravel briefly before Ryan led us back into the woods on what was clearly a much more primitive trail. It wound up and down the hillside, rolling, with a lot of log-overs and tight, twisty turns. I loved it. Fox Tail, it’s called. It’s not on any maps (yet), and honestly I’m not sure how easy it is to find from the road. I’ll have to go back and try to find it on my own, because I was stupidly not paying any attention to where we were going and just following Ryan. It acts as a great connector from one end of Brush Ridge back to Conklin Road where Indian pops out, and offers the option to do a longer ride and all of Brush Ridge rather than just bombing down Indian. There isn’t any really tough climbing on it, just a few short spurts.

As it grew darker, the trail was hard to follow in a couple spots, but after a harder look, it was always apparently where it went. Eventually, we popped out along the deer fence. I let off the brakes and blasted down the doubletrack, right behind Evan and Ryan. The dogs were running alongside us, adding some extra excitement. Sometimes I worry that one will jump into my path as I’m speeding downhill at 20mph, and, well, that would be really bad for both of us. Luckily, Ryan’s dogs are very used to being around bikes, and usually, they stay out of the way. Oslo sprinted along, off in the woods, while Lucy was right on my rear tire.

On the gravel climb up Conkin, I pushed it again, and it felt great. My legs felt strong. I was breathing hard, but steadily. My lungs opened up. I focused on getting up that hill as fast as I could without blowing up. Evan and Jalon were ahead. I set my sights on them and hammered.

I was so thrilled to feel good climbing again. Climbing is normally my jam, but lately, I have just felt sluggish, tired, and weak. I think part of it has been the heat. In May, it went from being in the 50s to being in the 90s basically overnight. My body doesn’t like to exert itself too much when it’s above 80 degrees. Of course, I force it to anyway, but I can definitely tell a difference in both my performance and my perceived strength. Throw some cooler temps in there—60s and 70s—and I’m a happy lady again.

We rode Chicken Peter all the way back to the lot, just in time for darkness.