At the grocery store in McHenry, we divided and conquered, spreading to all ends of the store to grab provisions for the weekend. It was then about a half hour drive to Big Bear Lake, where we stopped at the guard shack to grab our key. The other ladies hung out while I dealt with the administrative end of checking in, falling into a role as the “unofficial welcoming committee.” I stepped out of the small building to find them waving and smiling at the line of cars driving by. The young, blonde kid in uniform who was checking parking passes didn’t know what to think.

We found our cabin, unloaded the car, and quickly realized that it was BYOTP. Bring Your Own Toilet Paper. Ooops. Didn’t know that. We found some napkins in the car and used those for the time being. We later found out that the guards at the entrance station were supposed to issue us a roll of TP—standard for all guests. I guess we were just too intimidating that they were flustered and forgot.

The cabin was really nice—small but clean and very well-maintained. We claimed bunks and unloaded all the food on the table. Time to crack a beer.

To stave off sleep, we decided to take a drive around the premises. We quickly discovered that this was not a “typical” campground. Most people don’t just stay for a weekend. They lease plots of land where they keep a camper, usually with a porch and other infrastructure built around the shell to the point that many of these dwellings actually looked like homes. And everyone had a golf cart. Some of them were even souped-up, with light-up wheels and extra beefy tires. Some of them were mega-carts, with multiple rows of seating. The little vehicles zoomed back and forth like little ants. I’m used to being looked at strangely because I’m on a bike. Now we were being looked at strangely because we were in a car, not a golf cart. What a weird little world.

By the time we’d gotten slightly lost in the maze of campland roads, and stopped at the “Country Store” to grab some TP, it was a decent hour to go to bed, and we all welcomed our sleeping bags.

The next morning, Jeff Simcoe and his wife Annie met us at our cabin to ride the trails at Big Bear. I’d started talking to Jeff almost a year ago when I was about to take a road trip to Colorado, and wrote an article for Singletracks about potential places to stop and mountain bike along the way. Big Bear Lake, and nearby Coopers Rocks, were on the list. Jeff sent me a message offering his ride guide services if I stopped through, but I decided against it because it’s only two and a half hours from home, opting instead to hit places further west that I wouldn’t ever go to for just a weekend.

But Big Bear was certainly still on my radar, and it wasn’t a tough decision to make it the destination of our ladies weekend. Jeff was more than happy to hook us up with a great deal on the cabin, and show us all around.

Having never ridden with Jeff and Annie, I was a little nervous. I’m always a little nervous before riding with new people. I never want to hold anyone up, and sometimes I think that other people expect me to be a really great rider because I write about mountain biking. So, I put extra pressure on myself. But the couple was nice and chill as could be, and I was quickly at ease in their company.

The trails were awesome. We started out with some of the more technical ones, as they happened to be close to camp. Beaver Creek, Voo Doo Rocks, and Crack Trail offered some challenging rock lines, which I probably wouldn’t have tried on my own. But following Jeff, I was able to commit and I surprised myself when I nailed most of them. I even tried a sort-of-scary maneuver through a downhill rock crack. I stopped just before it and shrieked a little during my first attempt, but the second time around, I made it without a dab. Then there was the infamous “Crack” for which Crack Trail is named. It’s a giant crack between two rocks that is just wide enough for most handlebars. In the middle, you have to make an almost-90 degree turn, which tripped me up a little, but after a quick brace off the rock wall, I was able to ride through.

We then headed up the mountain to some more mellow, flowy stuff. Annie and I chatted, and the topic of racing came up. I’d been friends with Jeff on Facebook and he posted a few pictures of her in some recent mountain bike races. I’ve been thinking a lot about trying racing again lately, but I’m pretty apprehensive. I’m don’t particularly like competition or pressure, but I do like to challenge myself. And I’ve been wanting to put myself out there a little more in the mountain bike world, meet new people, and try new things.

It wasn’t long before Annie convinced me to try a race at Big Bear in August. She and Jeff are great, and I wanted to support their endeavors (they are the ones putting on the race). And I thought that it would be really fun to try to do these trails as fast as I could. The mix of tech sections and flow seems ideal. Anybody want to join me?

Unfortunately, once we’d climbed for a while, Carissa got a stick caught in her derailleur and it bent to the point where we couldn’t quite fix it. She could still use a few of the gears, but without the full range, she decided to ride back to camp. Later, Allison took a spill and twisted her foot, eventually ending her day on the bike as well. So it was just four of us to finish out the ride. We rode about 20 miles, through a mix of all sorts of terrain and ecosystems. Rocks, streams, swamps, pines, and ferns. Lots of ferns. 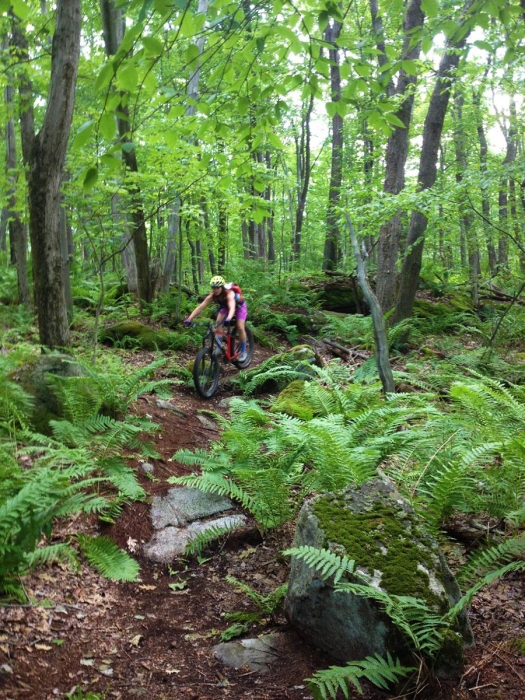 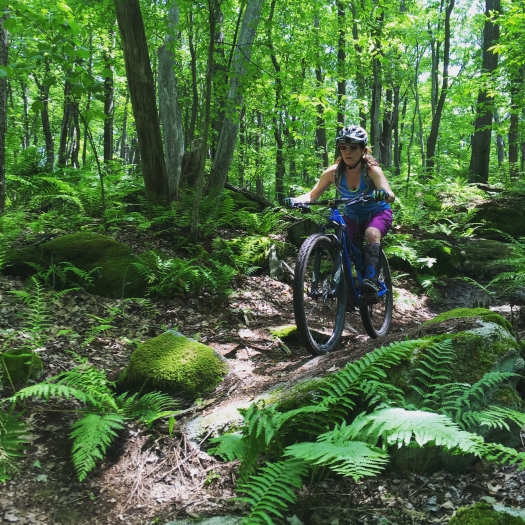 Jeff and Annie ended up hanging out with us the rest of the weekend. We all went out to dinner Saturday night, drove down to Davis for a ride on Sunday, and did another 11 miles at Big Bear on some trails we hadn’t hit yet on Monday morning before heading home.

Stay tuned for some words and photos on riding the CVI Trails near Davis, WV.

3 Replies to “Ladies of Big Bear.”