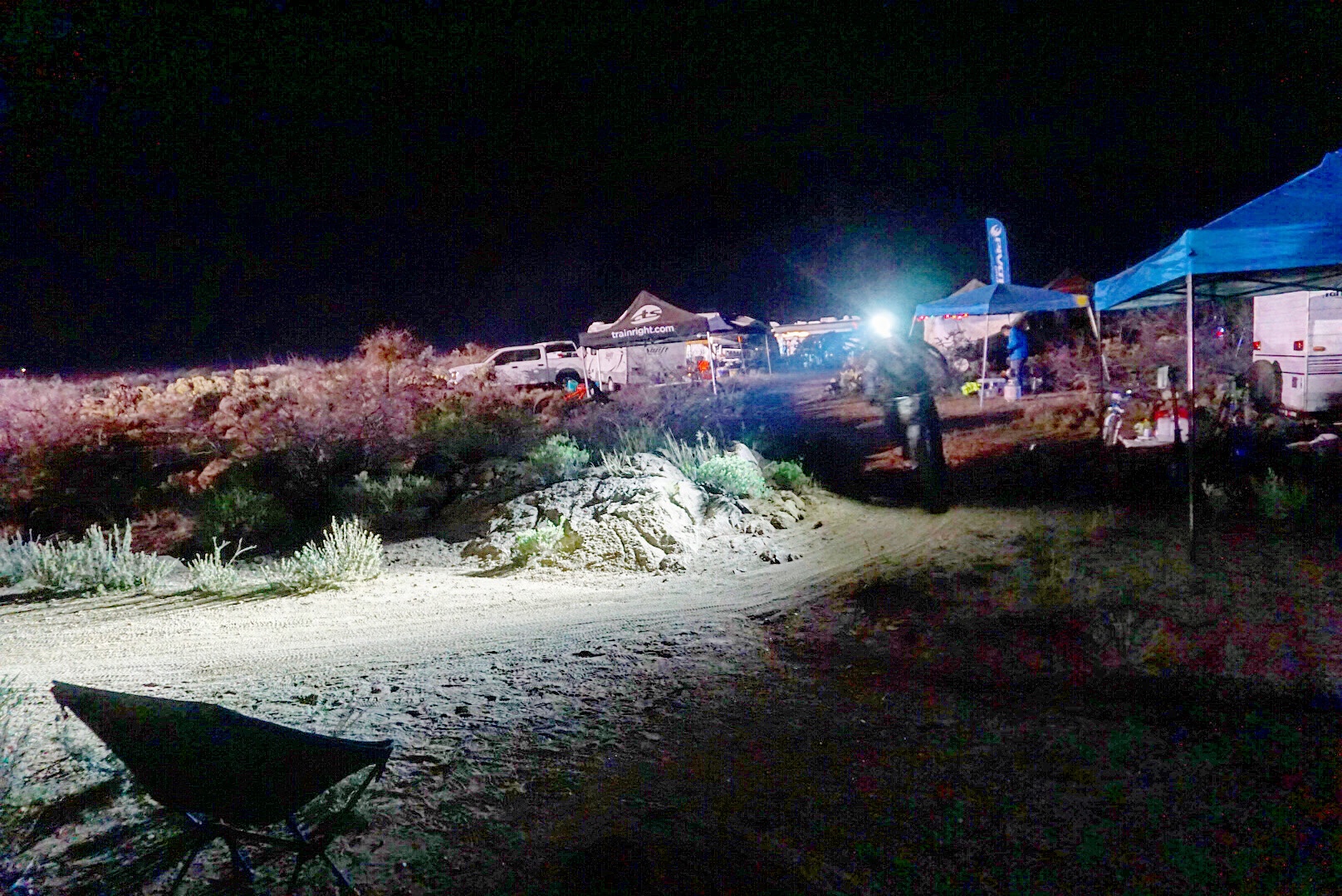 The sun was just setting as I began my first lap, casting shades of orange across the sky and bathing the desert in a beautiful warm light. I was excited to finally be on my bike after an afternoon of waiting for my teammates to complete their laps, and I was gunning to see just how fast I could complete 16.5 miles with about 1,000 feet of climbing, all on singletrack and some chunky fire roads.

I was at 24 Hours in the Old Pueblo, a 24-hour mountain bike race in the Sonoran Desert of Arizona. I’d been invited to go along on a media trip representing Singletracks, my first stint back in the bike industry in 2 years. Our crew consisted of two separate teams of journalists, a couple guys from the small PR firm that put the trip together, and bike component companies Hustle Bike Labs and Archer Components. Pivot Cycles gave us bikes to ride — the new Mach 4 SL, a full-suspension cross-country rocket ship that was absolutely perfect for the relatively smooth and sandy trails of this course — and we were provided helmets from Kali Protectives and lights from Lezyne for the ride.

The sun was dropping fast and it was getting dark. The singletrack popped out on a dirt doubletrack road and I merged with riders coming in from the left. There was an option here — racers could ride a stretch of the doubletrack, known as “The Bitches” for its seven punchy climbs, or they could “Skip The Bitches” and take the singletrack that I had just ridden. Though The Bitches are supposedly faster (and thus most of the serious racers go that route), the singletrack to bypass them is one of my favorite parts of the course. I was trying to do this lap as fast as possible — but that desire was not strong enough to skip a beautiful two miles of winding, rolling trail at sunset.

I turned my lights on when I got to the road, taking a moment to adjust to the new-to-me setup, finding the optimal combination of brightness and angles on my lights to illuminate the trail in front of me and the spiky cacti lining it. My biggest worry about the night laps was coming around a turn too hot and not seeing a cactus, but I quickly realized that fear was unfounded.

In fact, I felt even faster and more confident in the dark than I had on our pre-rides earlier that day and the day before. Only being able to see a thin sliver of trail focused me. I was flying through the night, in the zone and feeling the flow, intensely concentrating not only on maneuvering through the twists and turns but also on keeping my legs hammering. I don’t race very often, and it isn’t often that I go all out at max effort on rides. Working that hard took constant reminding myself to keep pushing, but it was so exhilarating. The night air was cool, a refreshing change from the warmth and unrelenting sun of the day.

The first half of the course is faster than the second, with almost no technical sections and less climbing, and it flew by. Before I knew it we were passing the Whisky Tree, a spot along the course not too far from the campground where folks gather with handles of whisky, heckling, trying to get the racers to take a shot. As I passed through just before 7 pm, the party was in full swing, but I didn’t stop. 10 miles in, 6 to go.

At some point after this, as my legs were starting to feel the effects of sprinting the last 10 miles but I was still passing and picking people off, I heard a woman’s voice behind me.

I didn’t recognize the voice and it’s not like I knew anyone else who would be out here right now anyway. I passed another racer.

“Come on, let’s get the next one!“ the voice exclaimed.

“I don’t know who you are but you’re awesome,” I yelled back, hoping the voice would identify herself. She didn’t. We continued on like this for a few minutes, passing people together. My legs burned, but this mysterious source of encouragement from behind kept me going. We popped out onto a short section of doubletrack and the owner of the voice pulled up next to me. I looked over and saw the Red Bull helmet. It was Rebecca Rusch.

Holy crap. I immediately felt embarrassed for saying I didn’t know who she was. Not that I should be expected to recognize her just by her voice but… it was Rebecca Rusch, one of the most famous women in mountain biking. I was at a loss for words.

“Thank you,” I managed to stammer out in between breaths.

“Come on, let’s crush this climb,” she said to me.

On the descent back down to the campground, I got caught in a line of racers all stuck behind one guy who refused to move over to let anyone pass and came to a near standstill at every little rock garden. Someone behind me yelled out, “Can you let some people by, dude?”

“Go!” he hollered angrily, but didn’t move out of the way.

Finally, he budged a little and a bunch of us flew by. In general, I was pleasantly surprised at how kind and respectful everyone was about passing and being passed. The 24 hour lap race format is different than most typical races in that you are surrounded by folks of varying speeds at all times. When the race is just one big long course, the fast people get to the front and the “party pace” folks naturally filter to the back and everyone else is somewhere in between. You fall into a group of people who are going your pace and usually end up with them for a while. When laps are 16.5 miles and lap times range from under an hour to 2+ hours, there is constant interfacing with a variety of people. I quickly learned the most appropriate, respectful and safe way to pass — come up behind someone, let them know you’d like to pass when it works for them, they give you a heads up as to when they are going to pull over and to what side of the trail, you go ahead, thank them and wish them a nice ride. Most people adhered to this — that one guy at the end of my first lap was the only person I encountered with any kind of attitude about it.

I rolled back into the campground, into “civilization” and the blinding lights of the exchange tent. Outside the tent, volunteers were telling racers to dismount and turn their lights off before entering. Numbers were announced as racers entered the tent to check in. Racers who were anxiously waiting to go out on their laps were corralled behind a fence until their team number was called. They’d then run out, exchange a small wooden dowel (the baton), give their names to the volunteers keeping track of who from what team was going out when, and the racer who was headed out would exit the tent, grab their pre-staged bike from the bike rack and take off down the trail.

When I got into the tent and gave my name to the lovely lady who was manning the notebook, she asked if our next rider was here yet. I scanned the crowd of helmet-clad people in the corral. “It doesn’t look like it…” I said.

“Okay, just give the baton to me and they can come get it,” she told me.

I left the tent and immediately texted Brandon, next up on my team. I’m done, get out there!

When I got back to camp, he was still getting ready. Everyone was amazed at how fast I had done it, including myself — I had said I’d be happy to do it in an hour and a half, but thought it would take longer at night. I’d finished in 1:17.

Buzzing with excitement, I downed some food, changed into dry, warm clothes, and then attempted to sleep.