The weekend began with a driving excursion east, mountain bikes spilling out the back of my Ford Ranger, and an eclectic musical mix that included Adele and Barry White spilling from my speakers. I took us the “fun route”—one that minimized highway time and maximized miles on back roads—my general road trip MO.

At the campground, we greeted our friends Steve and Tammy, set up the solo tent that Evan and I planned on sharing (so, we like to cuddle), and shortly thereafter headed into the town of Jim Thorpe to grab some grub and meet up with the other couple in our weekend trifecta, Ellis and Carissa.

The plan was to see some live music Friday night, drink beer, get weird, ride mountain bikes on Saturday, hang with an intimate group of like-minded people, and have an all-around awesome and much-needed weekend away after a phenomenally busy summer.

I’m happy to report, all goals were accomplished.

We saw Sam Bush at the Mauch Chunk Opera House, and it was a great performance. Tammy got the award (and Sam’s mandolin pick!) for best and bravest dancer, and the rest of us, after several more beers, danced our butts off during the second half of the show. I promptly passed out upon arrival back at camp, but come Saturday morning, I was bright-eyed and bushy-tailed for riding.

After a leisurely morning of coffee and a delicious breakfast prepared by Steve and Tammy (thanks, guys!), it was off to the trailhead.

The first section of trail was pretty brushy, but it soon opened up into a mix of grassy doubletrack and rocky singletrack. Major rock gardens were few and far between, but the trails were generally bony and loose, making for a somewhat technical ride. Lately I’ve been feeling good on the “techy” stuff—like something suddenly clicked and I’m moving beyond the riding plateau I’ve been on for a while now. This time was no different, and it felt good to actually stay on the bike in situations that several months ago would have had me hoofing it. 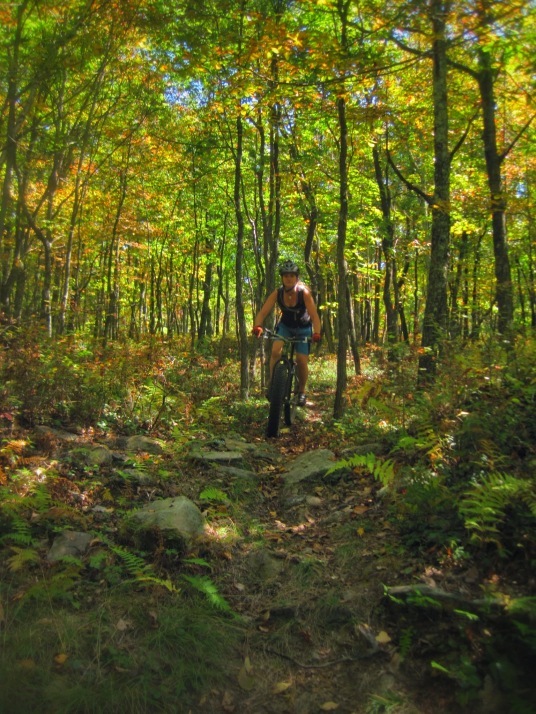 We noticed quite a few piles of bear scat in the middle of the trail, meaning there were either plenty of bears in the area, or just one very large bear that was eating a lot. Or had some very active bowels.

One of my favorite sections of trail wound through a grove of pines, then dropped into a small stream crossing. I don’t know what it is, but something about evergreens and mossy streams is just beautiful. 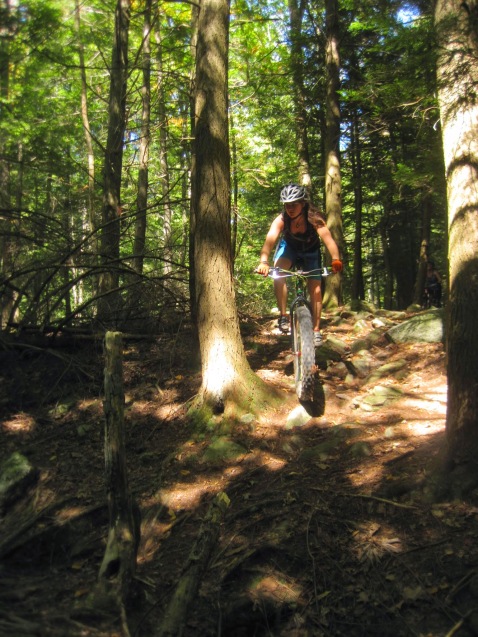 With the exception of a short uphill towards the beginning of the ride, most of the first half was relatively flat or downhill, with several loose and rocky descents that kept us on our toes. But all that downhill meant we had to go uphill again eventually, and it was then that I realized just how hot it was—somehow, the wonderful fall weather we had been having disappeared, and was replaced with a rerun of summer. Sweat poured off me, and my face burned. We all ended up taking our time pedaling up the hill, with the exception of Evan, who, in his usual fashion, did not seem to be effected by the heat and sprinted ahead. At the top of the hill we made the choice to head back to the car via mainly the grassy doubletrack trails, with a quick detour onto one last bit of singletrack.

The detour ended up being a little longer than expected, as our map wasn’t quite up to date or accurate, and we ended up taking the trail in the wrong direction. But it all ended well, as it popped us out at a familiar spot, and we proceeded on back to the vehicles.

By the time we were done, I was ready for that beer and venison burgers back at camp. Ellis and Carissa left us that evening to head to another engagement, and the rest of us had a relaxing evening by the lake. At sunset, we took a quick ride out to the dam and watched the sun dip below the water—a perfect end to a great day of riding.

Sunday morning, we headed back home, with plans to come back to Jim Thorpe to ride again soon.

One Reply to “Riding new trails around Jim Thorpe.”