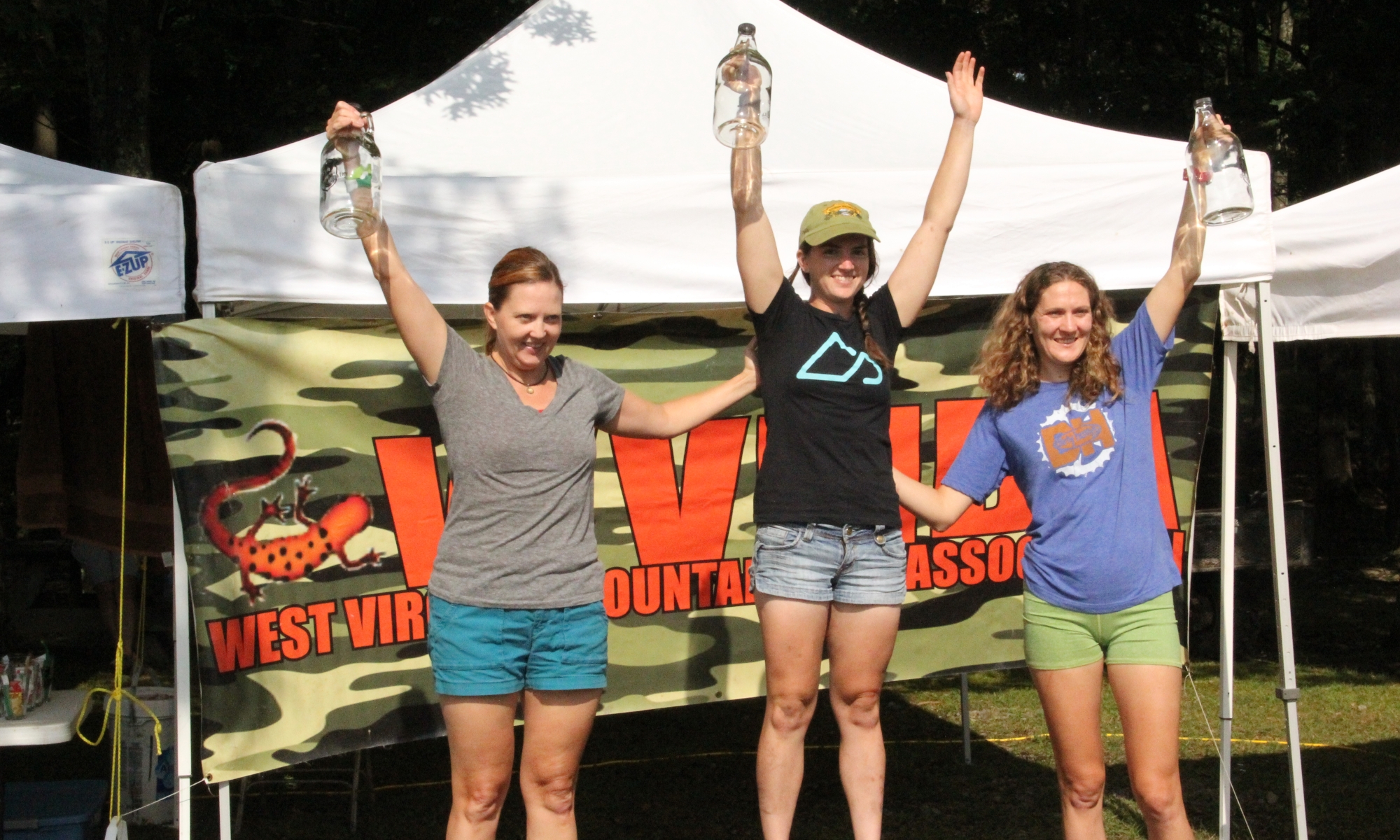 I stood, slightly chilly, under the big top tent as the rain poured down outside. My heart was pounding already. My stomach was in a knot. The other ladies all stood in a group, all friends from previous races and events. Most of them raced for the same team. They were all kitted-out, matching bibs and jerseys. I overheard a conversation about a 100k mountain bike race. Holy shit. They’re going to be really fast.

I stood alone. I’d met some of these girls last night and they were really cool, but I wasn’t brave enough to jump into their conversation. When the rain slowed down a little, I jumped on my bike and pedaled circles around the parking lot, waiting for the start.

I was about to do my first mountain bike race in a very long time. I am calling it my first race ever, because the couple that I did when I was a kid don’t really count. I don’t remember them much at all. The only thing I remember is that I was the only girl. It’s been a long time since then. I had figured racing wasn’t really my thing. Then Annie convinced me to try it. So here I was, in the pouring rain, about to go ride 20 miles of rocks and roots and steep climbs as fast as I possibly could.

5 minutes til start. I found myself a spot in the parking lot, next to Jason. I knew he looked vaguely familiar and then he talked to me and I realized that we knew each other. We exchanged small talk.

30 seconds. He wished me luck, and I returned the regards. We all were lined up. And then we were off.

We briefly rolled downhill and then we climbed up rocky, muddy doubletrack. I wanted to hang back in the beginning of the ride, be careful not to let the adrenaline get the best of me and burn out too early. But I still found myself passing people right off the bat.

Over the dam, and into the woods. I got ahead of another couple people when the techy stuff began. My plus tires did the job in the wet conditions. The wet logs seemed sketchy but I tried them anyway and made it over most of them with no issues. I tried to keep a consistent, moderate pace. I was excited now, still feeling slightly nervous I suppose, but it was definitely an excited nervous. I wanted to do well. My goal was to just have fun and ride my best, but of course I knew that if I messed stuff up that I knew I could clean, or blew up too early, or otherwise rode in a way that I knew was less than I best that I could, I’d be disappointed. I felt really good physically, so that was a good start.

It was really nice to ride in wet conditions again. It’s been so dry in Central PA, I’d forgotten what riding in the rain feels like. The mud wasn’t bad, and the rocks were a little slick but not as much as I’d anticipated. Crack Trail was lots of fun, one of my favorite parts of the race. My adrenaline was going, I was still fresh, and still taking it sort of easy. The bridges through the rock cracks were super slippery, so I opted to walk rather than ride them, and even that was a challenge. There were a couple other rocks gardens that I had ridden last time I was at Big Bear that I decided to walk today. Not crashing was another goal.

By the end of Crack, I’d passed all the other ladies, but I didn’t know it at the time. I didn’t pay any attention to who was in front of me or behind me at the start, so I had no idea how many people were ahead. I’d passed a few guys too.

Somewhere around mile 5 or so, we did a climb known affectionately as “soul sucker.” I didn’t remember it from riding with Annie and Jeff back in June, and I realized that we hadn’t ridden the second part of Crack then, for good reason. It really was a soul sucker. This is when I started to wonder how far in we were. I knew we would pass 3 aid stations, and we hadn’t even passed the first one yet. It felt like we’d done 10 miles, but I knew we hadn’t.

I tailed a guy on the doubletrack past the first aid station, waving and saying hello to the volunteers standing there, but not stopping. I had plenty of water and some food if I needed it, but I wasn’t hungry yet.

I’d waffled back and forth between wearing my Camelbak and just stuffing a bottle in my frame bag, and opted for the Camelbak because I figured I’d stay better hydrated with the easy-access drinking. And I wouldn’t have to stop to fill up. I’ve been riding with the pack all the time lately anyway, so why switch it up? They say don’t do anything differently on race day.

Past the aid station, the course turned to singletrack again. This part in the middle of the ride is a blur. I don’t remember exactly what trails we rode. I don’t remember exactly who I saw. I know I leapfrogged with one guy for a while—he’d get ahead on the descents and then he let me go ahead for the climbs. We really didn’t talk a whole lot. It was hard to talk and try to navigate these trails. But it was nice to have some company and someone riding a similar pace. I eventually lost him on one of the longer climbs just past the second aid station, and I was alone.

I didn’t see anyone else on the trail for the entire rest of the race. It was weird, knowing there were so many other people out there, but not seeing a soul. Sometimes, I forgot that I was racing. I found myself spacing out, and I had to remind myself to focus and keep pedaling hard. At this point, I knew that unless someone passed me, I was on the podium. I still didn’t know that I was first. That’s probably a good thing. Earlier, I’d passed Annie taking pictures, and she told me that I was doing great. She didn’t tell me that I was ahead, even though she knew I was. I later thanked her, knowing that I’d have felt a lot more pressure if I’d known it at the time. I was still just having fun, going for a mountain bike ride in the woods on some sweet trails in West Virginia on a wet, humid Saturday. No big deal.

I rode alone through the ferns, the pines, and down the bone-rattling descent towards the campground. I knew I had to be close to the finish. Soon, I saw the signs: Ultra 2nd Lap, and 1 mile to finish. On my drive down the night before, I had thought about switching to the 40-mile Ultra course, because the idea of challenging myself just to finish something appealed to me more than trying to race other people and do a distance that I knew I could do. But at this moment, I was so glad I had stuck with the 20-miler. I was worked. I don’t doubt that I would somehow finish the 40 miles, but it wouldn’t be pretty. And trying to go fast was a lot more fun than I thought it would be.

The last bit to the finish was the reverse of the start. I pedaled across that orange line painted on the ground and received a handful of claps and cheers. The food was spread out and looked amazing. I rode over to Annie.

Despite the fact that I’d considered it as I was riding solo those last 10 miles, I still figured there was probably someone in my class ahead of me somewhere. But no, I was first.

Annie offered me a Gatorade and told me where the hose was to spray off my very muddy bike.

Jason asked me how it was. Great! Apparently I won!

There was a group of people standing there who were super stoked for me.

I saw you riding around in the parking lot before the race, and I noticed you weren’t all kitted out. I said to myself, that’s the underdog. I’m glad you won.

I changed out of my wet, muddy clothes and grabbed a plate of food. Now for the awkward part. Riding bikes I can handle. The socializing with people I don’t know, that’s the tough part. Luckily, everyone was super nice, and I ended up making some new friends, which was a major goal for the day.

I had way more fun than I thought I would. And actually, I’m looking forward to doing another race at some point. I’ll definitely be back for more Big Bear events, and I’m already planning on trying out the 40-mile Ultra course next August.

Thank you Jeff and Annie Simcoe for the encouragement, support, delicious breakfast sandwich that helped fuel my ride, and for putting on a great event. And thank you to all the other volunteers and crew who helped make it happen.