Last year, my friends Tammy, Allison, Carissa, and I started a tradition of a yearly long-weekend mountain bike trip, ladies only. All of us ride with the guys all the time, which is awesome (I’m usually not really one for girls-only stuff anyway), but we thought it would be fun to do our own trip at least once a year. We went to the Pittsburgh area at the end of last summer, and this year, we decided to head south to West Virginia.

I’d made a contact at Big Bear Lake through my work at Singletracks, Jeff Simcoe. He’s the trail manager there and graciously offered us discounted lodging for the weekend and his time as a guide for one of our rides. It turned out that him and his wife, Annie, loved riding with us and we loved riding with them, so we basically hung out all weekend long.

On our way to Big Bear Lake, we stopped at Fork Run, near McHenry, MD to ride. As we rooted through our bags in the parking lot to find our riding gear, an older gentleman was finishing his ride. We started talking, and he warned us against doing the ride we had planned. It’s really rocky and there’s a lot of tough climbing, was basically his point. We assured him that we were used to both of those things. He asked where we were from, and we told him Pennsylvania. He said he’d never been anywhere in PA that was as rocky as here.

I didn’t believe him, because there are places I’ve ridden in PA that are just about as rocky as you can get. And last year on our trip to Pittsburgh we had a similar experience at Moraine State Park. Some dude in the parking lot told us a certain section of trail was “almost impossible” because it was too technical, and yet when we got there, we all thought that was the best part.

I can’t help but think that if we had a man in our group, we wouldn’t get such warnings. Chicks can ride rocks too, you know.

Fork Run ended up being great. Yeah, it was a little rocky in spots, and there were a couple steep (but super short) climbs, but it was nowhere near the “psycho ride” that we were told it was. Just a nice little leg stretch after being in the car for a couple hours. It was really wet—locals told us there had been torrential rains the night before—and the soil was sandy and gritty, causing my drivetrain to make all sorts of terrible noises. But it was hot and humid and the water felt amazing. 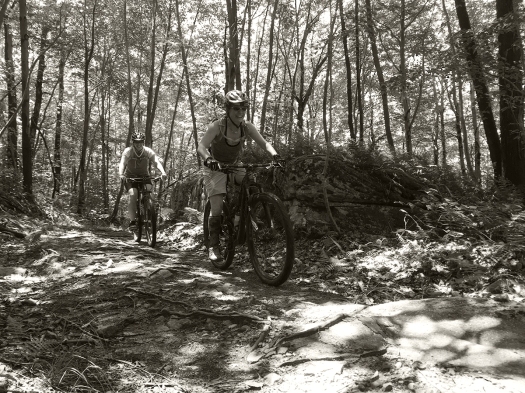 Fork Run also has some climbing areas, so we took a short detour at the end of our ride to check them out. A couple beers, some pizza, and a grocery store trip later, we were en route to our cabin at Big Bear Lake.